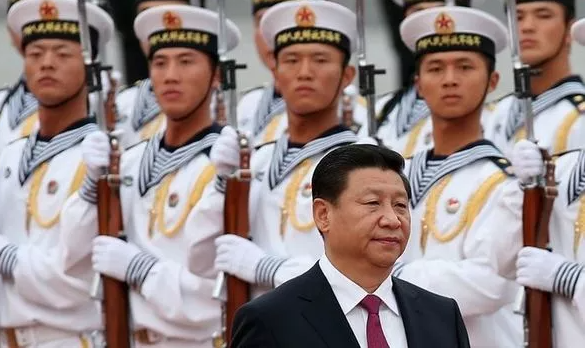 In January, Taiwan reported several “large incursions” by Chinese warplanes during US President Joe Biden’s first few weeks in office. Earlier this week, Biden called China’s President Xi Jinping for the first time since he was sworn into the White House.

Xi defended his country’s policies but told the US President “confrontation is definitely a disaster”.
It came after China issued a stark warning to Taiwan (People’s Republic of China) last month that “independence means war”.

The Chinese warplane incursions coincided with a US carrier battle group entering the South China Sea to promote “freedom of the seas”.

Alessio Patalano, East Asian warfare expert and author of Postwar Japan as a Seapower, told Express.co.uk that President Xi’s threats should be taken seriously.
He said: “I do believe President Xi has offered no evidence to suggest he is not serious in his propositions.

“I also believe that with 2049 as a significant year in the history of the People’s Republic of China and the Chinese Communist Party.

“Therefore, unless we see a different narrative emerging over this decade in which a different arrangement across the Strait is acceptable to Beijing, one should take seriously the risk of increased action - political as well as military - to ensure that reunification is achieved within a timeframe to allow to celebrate the first 100 years of the PRC in time.”

The eastern superpower claims ownership of its island neighbour, a democracy of around 24 million people, despite the two nations having been governed separately for over seven decades.
Beijing points to its “One China” policy which demands there is only one sovereign state under the name China.

Analysts have said China’s increased military actions this year are a sign Beijing is testing Mr Biden’s support for Taiwan.

Dr Patalano agreed the timing of China’s military actions were intended to send a message to the new US administration.

He added: “Usually during the first six months of any new American administration authorities in Beijing ’test’ American resolve.

“Incidentally, the same ‘testing’ happened around the Taiwanese elections last year.”
Dr Patalano explained how China’s military activity near the island has increased since the re-election of Taiwan’s President in 2020.

He said: “I think it is fair to argue that the landslide re-election of President Tsai reinforced her longstanding position that the People’s Republic of China and the Republic of China should engage with each other as equals - and this presents a fundamental challenge to Beijing’s approach to the relationship.

“Military activities have significantly increased since her election last year.

“This, combined with a renewed emphasis in the US to support Taiwan - including through new military sales - have contributed to a more pronounced use of military means to curb Taiwanese political appetite to maintain such a policy course.”

After their call earlier this week, Chinese media reported that Mr Biden and Mr Xi “had an in-depth exchange of views on the bilateral relationship and major international and regional issues”.

Mr Wu added: "They are a solemn response to external interference and provocations by 'Taiwan independence' forces.”

However, Taiwan’s President Tsai Ing-wen has repeatedly claimed the island is already an independent country.

Just days after Mr Biden was sworn into the White House, the US State Department reaffirmed its “rock-solid” commitment to helping Taiwan defend its island.

A statement from Ned Price, Department Spokesperson, read: “We will continue to assist Taiwan in maintaining a sufficient self-defence capability.

“Our commitment to Taiwan is rock-solid and contributes to the maintenance of peace and stability across the Taiwan Strait and within the region.”