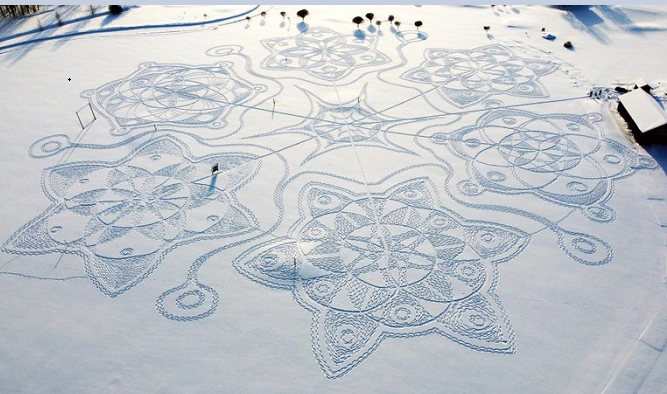 An ephemeral artwork made with thousands of footsteps in the snow has captured attention near Finland’s capital of Helsinki.

Under the guidance of local resident and amateur artist Janne Pyykko, 11 snowshoe-clad volunteers stamped a series of complex geometric patterns on a golf course. Together, the designs create a pattern with a starfish-resembling central figure surrounded by six huge snowflakes.

The artwork, which was completed over two days, measures about 160 meters (525 feet) in diameter. Finnish newspaper Helsingin Sanomat said it could be the largest snow-drawing ever made in the Nordic country.
“It was both a social challenge and a visual challenge,” Pyykko, who is inspired by visual effects and has earlier created smaller snow illustrations by himself, told The Associated Press on Wednesday.

With social challenge he referred to being able to inspire and lead the group to create the artwork that was based on strict geometrical design by computer as shown on a YouTube video posted by Pyykko.

At the site, the group used measuring and assisting strings to help to construct and maneuver the roundish figures.

Pyykko said “there is something in the human brain that likes the round form” and added that the drawing is best observed from the air. He noted that mapping out the patterns for snowshoers to follow within a set area of the Lofkulla golf course required a great deal of ground planning.

The work was designed to be temporary, lasting only until the next snowfall or heavy winds erase the footprints.