Myanmar coup: 'My ex is bad but military is worse' 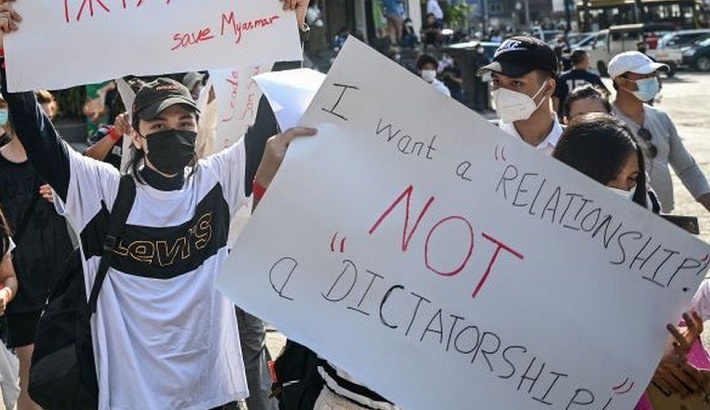 As people fill the streets for the third day in Myanmar to reject a military coup, some young demonstrators are waving signs that break with the country's more traditional protest messages.

In contrast to earlier opposition movements, this generation has grown up in a freer country, with better access to the internet and knowledge of Western culture and memes that go with it.

We've put together pictures of some of the witty, self-deprecating and occasionally naughty humour Gen Z (usually aged under 24) protesters have added to their pro-democracy messages for the military leaders that seized power last week.

The military are claiming, without evidence, that the November election that returned Aung San Suu Kyi's National League for Democracy (NLD) to power was fraudulent.

Of course, being the BBC, we've had to blur out some of the more, let's say, colourful language, but the ideas are still there.

'My ex is bad but Myanmar military is worse'

Generation Z and millennial relationships culture are making a strong showing in the signs.

One sign reads "My ex is bad but Myanmar military is worse", while another humbly suggests "I don't want dictatorship, I just want boyfriend".

The protests are the largest since the so-called Saffron Revolution in 2007 and are seeing tens of thousands of people rally in cities across the country.

On Monday police warned protesters to leave the streets or face force.

'You messed with the wrong generation'

Other protesters have been more explicit in their rejection of the coup, waving signs suggesting the military had picked a fight with the wrong people.

And another sign, shared on social media, drew on the widespread stereotype of millennials as a generation unable to get their lives together.

"We'll never be allowed to ruin our own future," it lamented.

'My dreams are higher than Mal's height'

"My favourite, Ariana Grande is TALLER than [Mal]", another sign read, referring to the US pop singer who is known for her diminutive size.

American music made an appearance in another sign, which referred to rapper Cardi B's song WAP that became an instant hit and meme in 2020.