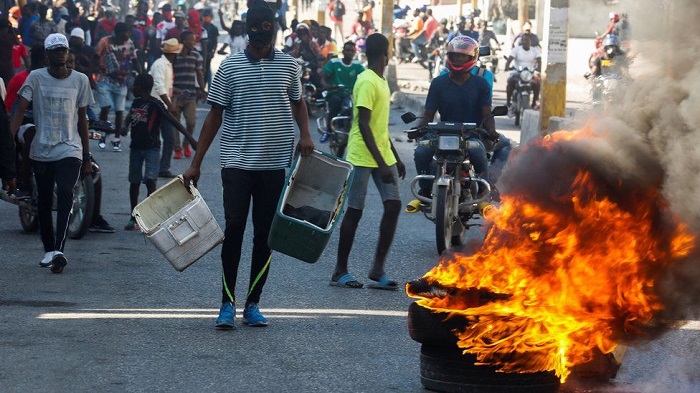 The president of Haiti says an attempt to kill him and overthrow the government has been foiled, amid a dispute over when his term ends.

At least 23 people were arrested, including a top judge and a senior police officer, the authorities said.

But opponents say it finished on Sunday. Protesters took to the streets of the capital Port-au-Prince and other towns over his refusal to step down.

There were clashes with police, who responded with tear gas.

Another accused the authorities of "kidnapping" those accused of carrying out the coup. "I am demanding the release of these people quickly," said Jean Reynold.

Security officials said there had been an "attempted coup d'etat" and cash and weapons - including assault rifles, machine guns and machetes - were seized as the arrests were made.

"I thank my head of security at the palace. The goal of these people was to make an attempt on my life," President Moïse said. "That plan was aborted."

The BBC's Will Grant says Haiti's political crisis comes down to two different interpretations of the constitution and the length of the president's current term.

Opponents of President Moïse say it ends now after a volatile period in office following a disputed vote in 2016. Mr Moïse disagrees, arguing that he has one year left of his term and has no intention of stepping down before that date.

After legislative elections were suspended in 2019, President Moïse is now in his second year of ruling by decree. Even if he manages to avoid being ousted, there are likely to be further protests ahead, our correspondent notes.

Haiti is the poorest country in Latin America with some 60% of the population living below the poverty line.

A group of US senators, in a letter to new Secretary of State Antony Blinken, has called on the Biden administration to withdraw Washington's support for President Moïse.