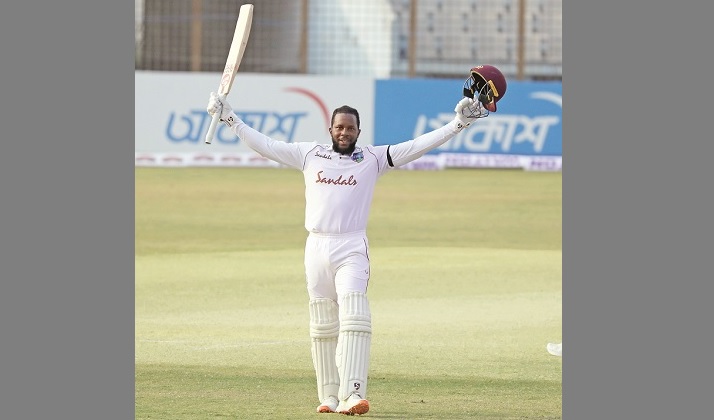 West Indies batsman Kyle Mayers celebrates after scoring a double hundred against Bangladesh during the fifth day of their first Test at the Zahur Ahmed Chowdhury Stadium in Chattogram on Sunday. – BCB Photo

When West Indies walked into the final day of the opening Test in Chattogram, not many believed the young, inexperienced side was capable of even challenging Bangladesh.

A magnificent unbeaten double hundred by Kyle Mayers on debut left Bangladesh shell shocked as West Indies pulled off a miraculous three-wicket win in the first Test to go 1-0 up in the two-match series at the Zahur Ahmed Chowdhury Stadium.

Mayers played a record-breaking knock of 210 runs, which is the highest individual score in the fourth innings for any debutant in the history of Test cricket, to take West Indies to 395-7 on the fifth day with 15 balls in hand.

Having dominated the first four days, Bangladesh were in for a rude shock as Mayers’ herculean effort guided the visitors to make a sensational comeback win.

The 28-year-old Barbadian formed a 216-run partnership with fellow debutant Nkrumah Bonner to keep West Indies’ hope alive in the contest as the stand remained unbroken in the first two sessions of day five.

The visitors went into the Tea break on 266-3 after 97 overs and despite Bonner being dismissed on 86 an West Indies lost few more wickets, Mayers’ epic innings pulled off the fifth-highest run-chase in Test cricket and the highest ever in Asia.

Depleted by the absence of Jason Holder, Shai Hope, Roston Chase and Shamarh Brooks who had all decided to opt-out of the tour, there was little indication of the second string side's fight in the first four days as Bangladesh continued to torment the visitors.

They had little chance of staying in the contest had it not been the brilliance of Mayers and Bonner.

The visitors were 59 for 3 in chase of 395 when the pair got together. They eased to 110 for 3 at stumps on day four to ensure Bangladesh have to work extra to earn a win.

The hosts, who were clearly traumatised with the absence of injured Shakib Al Hasan, had little answers to the Mayers-Bonner stand on the final day.

That, however, doesn't mean they failed to create opportunities. When the pair played out wicketless first two sessions, Bangladesh had at least four opportunities to dismiss both Mayers and Bonner.

The first came in the 53rd over when Mayers was on 49.

The outside edge was grassed in the cordon as the left-hander got to his fifty.

Three overs later, Bonner was trapped plumb in front by Nayeem Hasan. Bangladesh decided not to take the review but the replay showed the ball was crashing into the stumps.

While Bonner was happy with his extra cautious approach, Mayers ensured the scores weren't stagnant.

They picked their battles and aced their execution. Till Tea on the final day, Taijul Islam had given away runs at one-run-per-over from his 34 overs (36 runs).

The pair made up for their watchful approach by taking on Mehidy Hasan, Nayeem and Mustafizur Rahman.

They were particularly harsh on the pacer and Mayers even struck a boundary and a six to bring up the century stand.

In the first over of the final session, Bonner struck Taijul for a six to make their intentions clear. He was, however, dismissed on the very next ball as Taijul trapped him in front.

The 216-run stand was also the highest fourth-inning stand between two debutants - bettering the last effort from Mohammad Hafeez and Yasir Hameed against Bangladesh in Karachi in 2003.

After the interval, Bangladesh made a comeback in the contest with two quick wickets as Taijul trapped Bonner for lbw and Nayeem dismissed Jermaine Blackwood for nine.

But Tigers were again pushed to a corner by the partnership between Mayers and Joshua Da Silva as both added 100 more runs for the sixth wicket and took West Indies close to victory.

Taijul clipped the stumps of Joshua after he scored 20 runs but by that time West Indies were an inch away from the victory.

Mehidy also dismissed Kemar Roach when the scores were level but Mayers, who hit 20 fours and seven sixes, rightfully took the final single to complete the historic win.

Bangladesh, after dominating the first four days of the Chattogram Test, paid the price of the blunt bowling and numerous miss-fielding but above all, it was all the brilliance of debutant Mayers, who showed controlled aggression to guide West Indies to the second-highest successful run-chase ever in fourth innings.