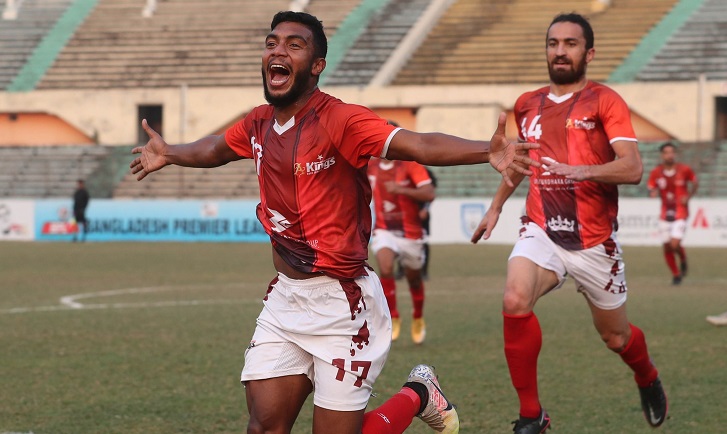 Bashundhara Kings forward Mahbubur Rahman Sufil celebrates after scoring a goal against Chittagong Abahoni Limited in their 1-0 triumph in a Bangladesh Premier League Football match at the Bangabandhu National Stadium in the capital on Friday. –Reaz Ahmed Sumon

Defending champions Bashundhara Kings extended their winning streak in the ongoing Bangladesh Premier League to six matches as they clinched a 1-0 win over Chittagong Abahoni Limited at the Bangabandhu National Stadium on Friday.

Raul failed to connect the ball from a direct free kick by Brazilian forward Robson Azevedo Da Silva Robinho in the 13th minute while his close-range header from inside the box was smartly denied by Ctg Abahoni goalkeeper Mohammad Nayem in the 30th minute.

On the other hand, a powerful long-range right-footer by Jonathan from nearer to the box hit the crossbar in the 38th minute.

Ctg Abahoni also got a chance but a long-range right-footer from midfielder Rakib Hossain from outside the box missed the target in the 31st minute.

After conceding the goal, Ctg Abahoni got a chance when Brazilian forward Nixon Guylherme Rocha Brizolara sent the ball inside the box in the 72nd minute but both front-liners -- Nigerian forward Chinedu Matthew and midfielder Rakib -- failed to reach the ball.