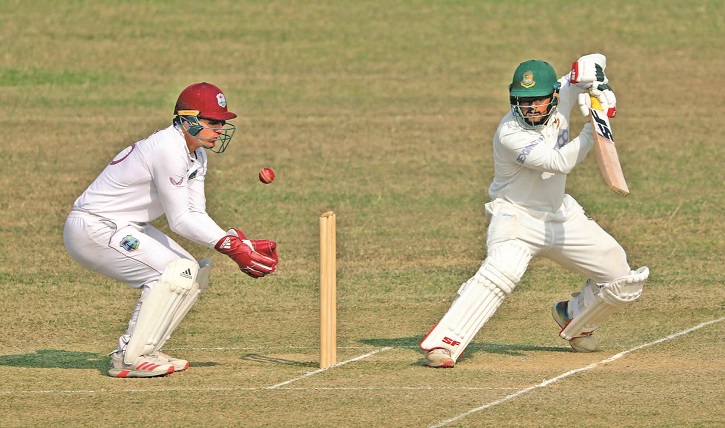 Bangladesh Cricket Board XI batsman Yasir Ali plays a shot during the third day of their three-day practice match against West Indians at the M A Aziz Stadium in Chattogram on Sunday. – BCB PHOTO

West Indians had a fruitful outing as their lone practice game against BCBXI ended in a draw at the MA Aziz Stadium in Chattogram on Sunday.

The tourists did well in the game as three of their batsmen hit half-centuries while four of them scored over 40 runs while their bowlers have also done well in this game against BCB XI comprising five members of Bangladesh’s Test squad.

West Indians resumed their innings at 179 for five and were all out for 291 on the final day with Raymon Reifer was the highest scorer for the tourists on day three posting 49 while wicketkeeper-batsman Joshua Da Silva scored 46.

West Indians had set a big target of 389 runs for BCB XI. However, racing to chase this target never was a goal for the hosts. At the end of Day 3, BCB XI scored 63 for two in 29 overs and the game ended in a draw.

“I am very happy. I thought the guys got a good blow. The batters got two chances to bat. Some guys got good scores in the game. Fast bowlers and spinners got to bowl in the second innings where we could get 29 overs in. So I am quite happy. We got ten wickets in the first innings, which was good. I think the guys are ready to go,” said West Indians skipper Kraigg Braithwaite adding that he is confident about Rakheem Cornwall whom they did not use in the second innings.

“I was very impressed. He bowled well, created a lot of pressure with dot balls. I know Rakheem’s ability. I knew he was always a quality off-spinner. It is good to see him in these conditions. I know he will do well in this Test,” he said.

Now, the West Indies, who lost the ODI series to the hosts 3-0, will take on the Tigers in two-match Test series starting from February 3 at Zahur Ahmed Chowdhury Stadium in Chattogram. The second Test will be played in Dhaka from February 11.