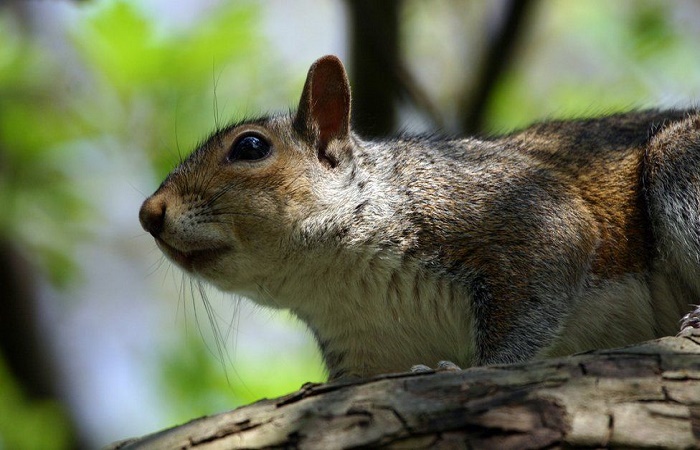 The UK government has given its support to a project to use oral contraceptives to control grey squirrel populations.

Environment minister Lord Goldsmith says the damage they and other invasive species do to the UK's woodlands costs the UK economy £1.8 billion a year.

The bizarre-sounding plan is to lure grey squirrels into feeding boxes only they can access with little pots containing hazelnut spread.

These would be spiked with an oral contraceptive.

Lord Goldsmith says the damage from squirrels also threatens the effectiveness of government efforts to tackle climate change by planting tens of thousands of acres of new woodlands.

On Tuesday, the Department for Environment, Food and Rural Affairs (Defra) told BBC News: "We hope advances in science can safely help our nature to thrive, including through the humane control of invasive species."

A partnership of conservation and forestry organisations called the UK Squirrel Accord (UKSA) is behind the proposal.

It says grey squirrels, which were first introduced from North America in the late 19th century, cause huge damage to woodlands by stripping bark from trees aged between 10-50 years, the younger trees in a forest.

They particularly target broad-leafed varieties including oak, which are particularly ecologically important because they support so many other species.

It is estimated the UK is home to some three million of these invasive rodents.

They have displaced the native red squirrel across most of the UK.

Lord Goldsmith says the government supports the plan as well as a longer-term effort to breed infertility into female grey squirrels to reduce their numbers.

Invasive non-native species such as grey squirrels threaten our native biodiversity, he argues.

When regulating grey squirrels with oral contraceptive was first proposed in 2017, the government's Animal and Plant Health Agency said it thought it could reduce their numbers by as much as 90%.

The project also has royal approval.

Prince Charles was instrumental in founding the UK Squirrel Accord with the objective of "managing the negative impacts of invasive grey squirrels in the UK".

He has written of the importance of protecting Britain's remaining red squirrels.

"These charming and intelligent creatures never fail to delight", he wrote last week in his capacity as patron of the Red Squirrel Survival Trust, describing red squirrels as the "symbol and benchmark" of healthy woods.

The UKSA maintains that dosing the animals with contraceptives provides a humane alternative to culling them.

Last week, the Royal Forestry Society, a member of the Squirrel Accord, called for just such a cull.

Simon Lloyd, its chief executive, says efforts to tackle global warming and improve biodiversity will be undermined unless grey squirrel numbers can be reduced.

New trees will not survive to "deliver the carbon capture or biodiversity objectives if grey squirrels cannot be controlled", he told the Daily Telegraph.

The UKSA has been experimenting with ways to deliver oral contraceptives to squirrels for more than three years now.

Last year, it tested special feeding stations designed so only grey squirrels can gain access in woodland in East Yorkshire.

Instead of contraceptives, the hazelnut paste bait was dosed with a dye that, when ingested, causes squirrel hair to fluoresce under UV light.

The researchers found that more than 90% of the grey squirrel population being studied visited the traps.

They concluded that it was possible to deliver repeat doses of a contraceptive to the majority of grey squirrels in a wood.