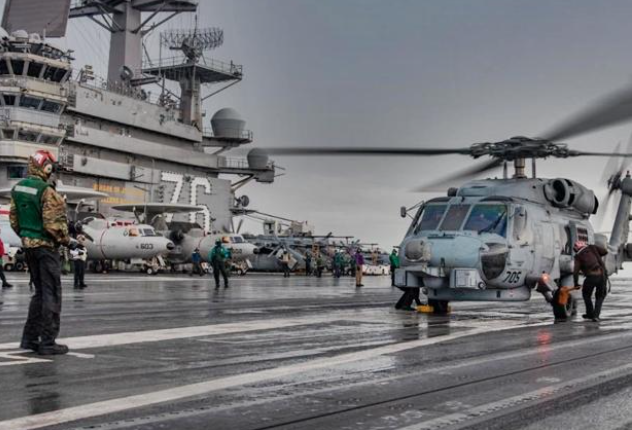 Amid increased tensions between Taiwan and China, a US aircraft carrier strike group led by the USS Theodore Roosevelt have entered the South China Sea to promote "freedom of the seas".
According to an official statement by the US Indo-Pacific Command (USINDOPACOM), the Theodore Roosevelt Carrier Strike Group (TRCSG) entered the South China Sea on January 23 to conduct routine operations.

"The TRCSG is on a scheduled deployment to the US 7th Fleet to ensure freedom of the seas, build partnerships that foster maritime security, and conduct a wide range of operations," it further read.

This comes days after China passed a law that gives power to its coastguard to fire on foreign vessels and demolish structures built in disputed waters, South China Morning Post reported.

China's top legislative body, the National People's Congress Standing Committee, on Friday passed the coastguard law that empowers the coastguard to use "all necessary means" to deter threats posed by foreign vessels in waters "under China's jurisdiction".

It will also allow the coastguards to launch pre-emptive strikes without prior warning if commanders deem it necessary.

The SCMP reported that it is yet to ascertain whether the law will be applied to all waters claimed by Beijing, which has a number of competing claims with its neighbours in the East and South China Seas.

Meanwhile, Taipei on Sunday expressed gratitude to the US for its commitment of "rock-solid support" against China's coercion after the United States expressed plans to strengthen ties with Taiwan under President Joe Biden's administration.

"We sincerely thank US State Department for its rock-solid support of democratic of Taiwan in the face of Beijing's ongoing coercion. Based on shared values and interests, we are committed to our partnership with the United States in furthering peace and stability in the Indo Pacific," Ministry of Foreign Affairs of Taiwan said in a tweet amid Beijing's growing belligerence.