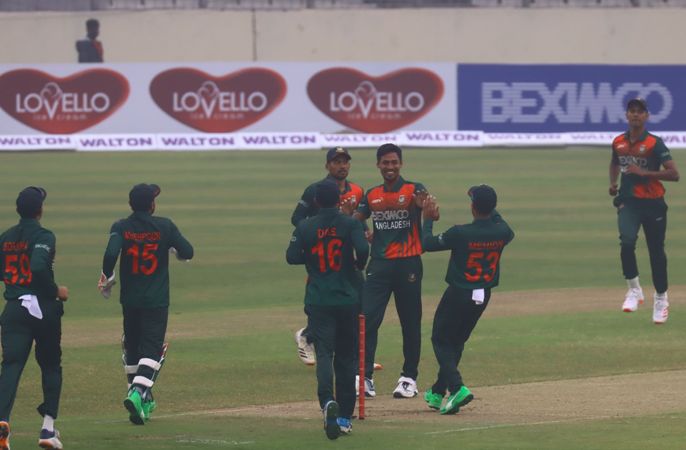 Rain has poured amid the first ODI between Bangladesh and the West Indies to halt the proceedings of cricket’s return to the country after a break due to the pandemic.

Joshua da Silva and Andre McCarthy were both batting on 4 with the Caribbean side on 15 for 1 in 3.3 overs when the play was interrupted at the Mirpur Sher-e-Bangla Stadium on Wednesday.

Mustafizur Rahman bagged the wicket of West Indies opener Sunil Ambris (7) in just the second over of the innings with a full-length delivery.

Earlier, Bangladesh won the toss and sent West Indies to bat first in the first of three-match ODI series.

Tigers, who last played an international match on March 11, did not wait so long to play an international fixture ever since they attained Test status more than 20 years ago and it has been a frustratingly long wait for a cricket crazy nation.

In comparison, the West Indies have played plenty of cricket in 2020 after the Covid-19 breakout including tours of England and New Zealand.

With this series, the two teams also commence their journey in the ICC World Cup Super League – a series of competitions that will determine The top eight teams of this competition will enjoy a direct entry to the World Cup 2023 in India.

This series will be marked as Shakib Al Hasan’s comeback series after serving a year-long ban imposed by the ICC for failing to report corrupt approaches made to him by the bookies.