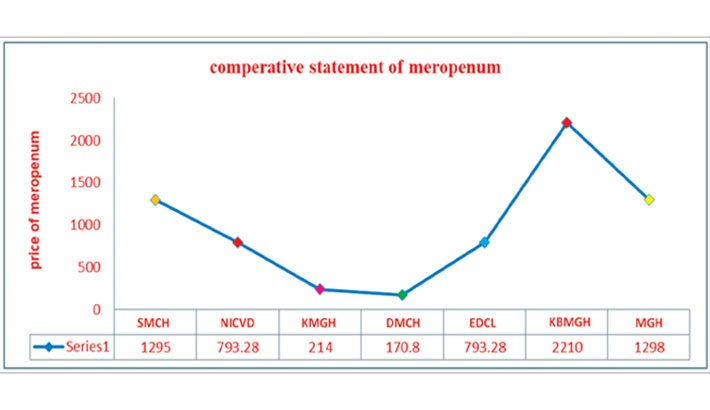 Cashing in on the countrywide lockdown enforced to contain the coronavirus infections, some public hospitals in Dhaka procured a certain injection at an unusual price of their will in the last two months of the previous fiscal year.

The price differed by Tk 2,040 per meropenum 1gm injection from a hospital to another, according to the report of an audit conducted by the Health and Family Welfare Ministry.

They also bought a large volume of injection, which is used to treat severe bacterial infections, although they had sufficient stock beforehand, causing losses to the government coffer. There is also a chance for the medicine to get damaged for storing it for a long time.

While Dhaka Medical College Hospital (DMCH) bought per vial of the injection at Tk 170, Kuwait Bangladesh Maitree Government Hospital (KBMGH) procured it at highest Tk 2,210, according to the audit report.

The Daily Sun obtained a copy of the audit report conducted during the 2019-2020 fiscal year.

Additional Secretary (Audit and financial management) of the Health Services Division Mohammed Shahadat Husain told the Daily Sun that action will be taken against those involved in such anomalies. “There’s no scope of such a huge gap with the market price.” he said.

The report mentioned that the price varied as many hospitals did not collect the injection through a participatory bidding process. Instead, they procured it at a high price for personal gains which caused the government financial losses, it said.

Meanwhile, some hospitals, including DMCH and Kurmitola General Hospital (KMGH), had been able to collect the injection at a lower price due to proper bidding.

As per the report, the Essential Drugs Company Ltd (EDCL) could not produce and supply the injection to the hospitals on time due to the shortage of its raw material meropenum with sodium carbonate USP (sterile micronised).

And the hospitals took the chance to buy the injection at a high price.

The EDCL meanwhile fixed the injection price at Tk 793.28 for the crisis period.

However, KBMGH, Mugda General Hospital (MGH) and Suhrawardy Medical College Hospital (SMCH) bought the injection at a high price than the EDCL-fixed one.

On the other hand, DMCH managed to buy the injection at Tk 170 while KMGH at Tk 214 and the National Institute of Cardiovascular Diseases (NICVD) Hospital at Tk 793.28, according to the audit report.