It’s ‘rat-race’ between Mehedi and Mahedi 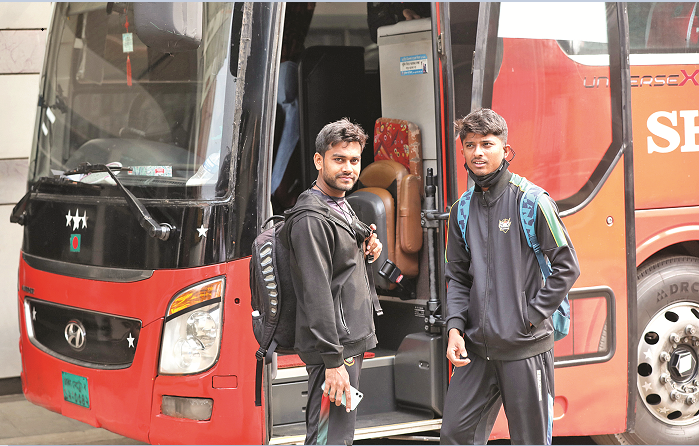 There is a distinct similarity in the name of the duo - Mehedi Hasan and Mahedi Hasan - and their skill set is also the same, off-spinning all-rounder.

Since the start of the national training camp on January 10 ahead of Bangladesh’s home series against West Indies, one thing remained pretty much the same, both of them working together closely in the nets.

The duo even batted together in the nets when the opportunity was given by the team management after making them bowl for hours and honing their fielding skill in the opening two-day of the camp.

Mehedi, who is more known as Miraj, certainly knows that Mahedi will give him a tough competition for the spot of Tigers’ playing XI when the hosts take on the visitors in ODIs with the latter stands a better chance considering their recent form.

In the Bangabandhu T20 Cup, Mahedi won the battle of nerves as he managed to win a game for Minister Group Rajshahi by bowling the last over and defending nine runs. He even scored 145 runs and took four wickets in eight matches during the tournament.

On the other hand, Fortune Barishal’s Mehedi seemed to have lost his way when Gemcon Khulna’s Ariful Haque smacked him for four sixes in the last over to win an incredible game. Mehedi picked eight wickets in the tournament but could only manage 43 runs in nine matches.

With the willow certainly, Mahedi stands a better chance than the experienced campaigner considering the 26-year old is one of the most consistent performers in the domestic circle and was in good touch during the last T20 tournament.

Bangladesh selector Habibul Bashar told The Daily Sun that they are waiting to see a good fight between the two cricketers for a spot in the national ODI team.

“I think Mahedi is a genuine all-rounder and Miraj (Mehedi Hasan) will have a good competition with him especially in white-ball cricket,” said Habibul.

Mehedi also knows the reality and with his below-par performance in the recent past international series what he is eagerly waiting for is just getting a spot in the playing XI to prove his worth.

“You see, in the last three or four international matches, I didn't do well at home or abroad,” Mehedi told reporters in Mirpur.

Mehedi however said he was taking confidence in his performances against the Caribbean side during their last home series against West Indies in 2018 where he was the highest wicket-taker in both Tests and ODIs – with claiming 15 and six wickets respectively.

“I will have an advantage because I've done well against them both in Tests and ODIs in our last meeting on home soil,” he said.

“I will try to improve my performance and make sure that at the end of the day, the team receives a satisfactory result,” he said.

The team management will have a chance to see them both in the two intra-squad matches of Tigers, with the first one scheduled in BKSP.

Both the players will be eager to prove a point and make sure they are one step ahead of each other to make a place in Bangladesh XI.