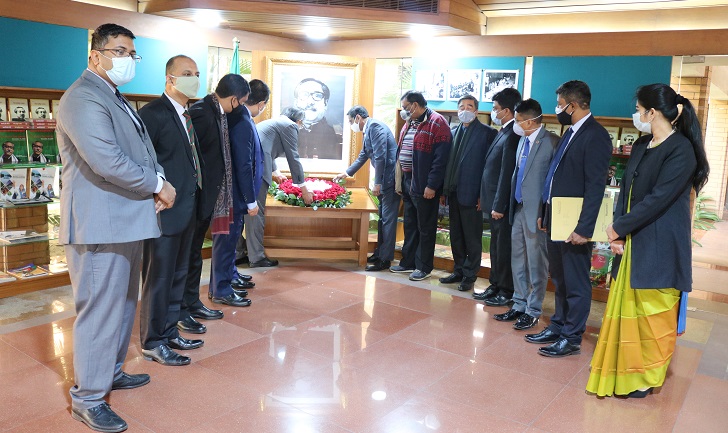 On this historic day, Jan 10 in 1972, Bangabandhu returned home nearly a month after Bangladesh gained victory in the nine-month liberation war against the Pakistani occupation forces.

Speaking on the occasion, Bangladesh High Commissioner to India Muhammad Imran paid tribute to Bangabandhu describing his homecoming as a complete fulfillment of the victory.

He recalled the help and assistance of India under the leadership of late Prime Minister Indira Gandhi and the 1971 War of Liberation in which three million people laid down their lives.

The High Commissioner said Bangabandhu, in his historic address to a cheering crowd during a stopover in New Delhi on way to Dhaka, laid the foundation of the “unique relation” Bangladesh and India enjoy today.

Describing Bangabandhu as a real “people’s leader” Muhammad Imran urged the young generation, students and children to read about the life and work of the Greatest Bengali of all time so they can better contribute to  fulfilling his dream of building “Sonar Bangla”, a land of happiness and prosperity and free of hunger and exploitation.

Two prominent Indian journalists, Gautam Lahiri and Soumya Bandyopadhyay, took part in the discussion at the mission underlining the importance of further consolidation of the mutually beneficial relationship between Bangladesh and India.

Earlier, the High Commissioner, accompanied by the officers and staff of the mission, placed a floral wreath before the portrait of Father of the Nation at the mission’s Bangabandhu Corner.

The function was conducted by Minister (Political) Md.Nural Islam.

A documentary edited by the High Commissioner on Bangabandhu’s release from Pakistani jail on Jan. 8, his arrival in London, meeting with former British Prime Minister Edward Heath, Bangabandhu’s press conference in London, his stopover in New Delhi before finally landing in Dhaka on Jan 10 and his speech before a sea of people at the then ‘Race Course maidan’ was screened on the occasion.

A special magazine titled ‘Glorious Bangladesh’, published for marking the 50th Victory Day, was also unveiled by the High Commissioner.

A one-minute silence was observed, followed by a special prayer in memory of Bangabandhu.