Amazon plots a course into the healthcare industry 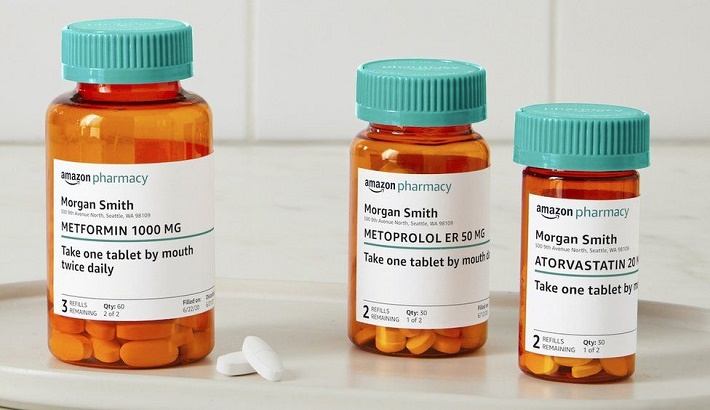 "I think the impact would be huge," says Ahsan Bhatti, owner of online pharmacy Quick Meds.

He is concerned about the prospect of online giant Amazon moving into the pharmacy business in the UK.

"I'm worried. They'll have a massive marketing budget, and they'll definitely take a sizeable chunk out of every other pharmacy on the market. There will be closures as a direct result of it," he says.

Bhatti will be closely watching developments in the US where Amazon Pharmacy launched in November.

The service allows customers to make pharmacy transactions through Amazon and receive unlimited, free, two-day deliveries if they have a Prime membership.

Although Amazon hasn't yet announced plans for other countries, chemists in the UK are preparing themselves for a new competitor.

Mr Bhatti is one of a growing number of pharmacists to sell products online, but Amazon's entry would also be likely to affect High Street pharmacies as well.

"What is lacking in every other pharmacy across the UK is the logistics and Amazon do that exceptionally well. It's exactly what consumers want - having a prescription by 10am and dispensed by Amazon to them in the evening. The likes of Lloyds Pharmacy and Boots can't do that, and independent pharmacies can only do this on a local level," says Mr Bhatti.

Mr Bhatti opened Quick Meds in March, after putting in an application to the NHS 11 months earlier. It offers products online, as well as consultations over phone, WhatsApp, email, live chat and video, and even offers same day services locally.

However, for nationwide orders, the company relies on Royal Mail - and this is where Mr Bhatti believes Amazon has the edge over online pharmacies as it has proven it can be relied upon for speedy deliveries.

"As great as Royal Mail are, occasionally things go wrong or missing and these delays might not be a big deal for online shopping but if we're talking about a heart or diabetes medication, all of a sudden, it's a problem," he says.

It's not just logistics that Amazon has on its side - the sheer size of the company enables it to have an advantage at the negotiating table.

"In the US, companies like CVS and Walmart negotiate drug prices all the time, and they have a fairly significant amount of market power. They've been able to create monopolies on certain drugs, making it more difficult for consumers to access drugs if you're not shopping with them. If Amazon enters, it disrupts this because they have much more sizeable purchase power," says Kate McCarthy, healthcare analyst at research company Gartner.

Jeff Bezos, Amazon's chief executive, once said "your margin is my opportunity", implying that Amazon delivered better prices by removing the costs added by the middlemen in the supply chain. The pharmaceutical and healthcare sectors have complex and inefficient supply chains that he would look to cut out.

This ultimately means that Amazon may negotiate better prices, and potentially offer discounted rates to consumers to get them through the online door of Amazon Pharmacy.

According to Scott Galloway, professor of marketing at NYU Stern, serial entrepreneur and author of Post Corona: From Crisis to Opportunity, consumers will be the winners over the short and medium term.

"For the most part of Amazon's history, as a consumer you're getting products for near cost or sometimes even below cost and that has just been an incredible boon for consumers and shareholders," he says.

Amazon Pharmacy is not just about the technology company entering the pharmaceutical retail market; it has been readying itself for the entire healthcare sector.

"Amazon have been working on ways to ensure their platform is dynamic and secure for healthcare organisations in order to partner with them - you see many organisations looking at things like Alexa for healthcare skills, and building healthcare apps on Amazon Web Services, or leveraging Amazon's cloud storage. Now, Amazon is focusing on the actual consumer services," says Ms McCarthy.

Eventually, the company could use data from its different arms to build a picture of each consumer's health, and use this to provide them with products and services.

"With their new wearable Amazon Halo, the company can build a 3D image of their consumers and they can then combine this with the foods you eat through Whole Foods, data from Amazon Prime and Alexa, and information such as your post code, relationship status, demographic data," says Mr Galloway.

Currently, the healthcare system is largely reactive - consumers seek medication and other healthcare services when they need them but Mr Galloway believes that Amazon could change this dynamic and even offer Prime members special recommendations around exercise products, nutrition and medicines.

"They can use this to offer proactive healthcare services," he says.

It wouldn't be unfeasible for Amazon to enter the health insurance market considering the amount of data - and technological capabilities - at its disposal to assess risk.

Mr Galloway says that over the medium to long term, Amazon will put a number of healthcare companies out of business. At the same time, healthcare start-ups may struggle to get a foothold in a market that Amazon has entered.

"It's very difficult to get funding now for an e-commerce company because the general assumption is that Amazon is unassailable," he says.

Amazon counters that, saying it has plenty of competition: "Amazon Pharmacy operates in a competitive environment with other US pharmacies, and we know our customers have a choice. We are working hard to earn their business," a company spokesperson told the BBC.

Ms McCarthy says that Amazon typically brings improvement to the industries it enters but says it doesn't typically unseat industry incumbents, and she says the same will be true for healthcare companies.

"It's more a case of how everyone adapts," she says

Mr Bhatti suggests that pharmacies should adapt by going online and diversifying their income.

"You can't rely on NHS income, you have to start developing private services and require that personal touch through face-to-face interactions," he says, adding that they should also be prepared to partner with Amazon.

Leyla Hannbeck, chief executive of the Association of Independent Multiple Pharmacies (AIMp), claims pharmacies are "not trying to maximise potential sales" and are instead focusing on "caring for the health of their patients".

"The pharmacy network is already under threat due to the lack of funding and a multi-national player such as Amazon could be the final blow for many and disrupt this valued network. When the choice, and that personal interaction and care in the community is gone, the consumers are not the winners," she says.

But Amazon is taking its foray into healthcare seriously - it's not just expanding its already vast retail network. According to Ms McCarthy, Amazon has put out job posts for clinicians both for Amazon Pharmacy and for other areas of its business.

This suggests that it may eventually be able to offer this same personalised service as existing pharmacies.