CDA of Oman pays his farewell call on the Foreign Minister 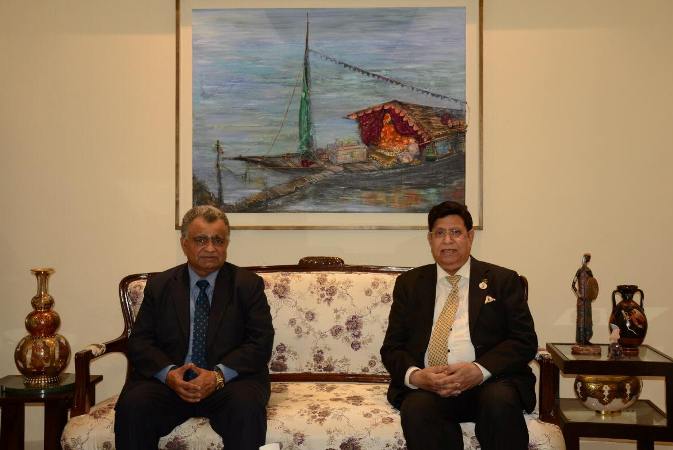 Foreign Minister AK Abdul Momen has highly appreciated Oman’s support at the International Fora on Rohingya issue, particularly its role at the recently 3rd Committee Resolution at the UN on the Rohingya issue and also in the Gambia- led case in ICJ.

Momen made the remark when the Head of Mission of Embassy of Sultanate of Oman Ta’eebsalim ‘Abdullah Al ‘ Alawi paid his farewell call on the Foreign Minister at his official residence recently, said a Foreign Ministry press release on Saturday.

The CDA expressed his deep appreciation for the support and cooperation extended to him during his tenure in Bangladesh and referred to the transformation of Bangladesh under the leadership of Prime Minister Sheikh Hasina in the last ten years as he could compare the present Bangladesh and what he saw as Head of Asia Department years back.

Ta’eebsalim ‘Abdullah Al ‘ Alawi appreciated the unprecedented role of the government of Bangladesh  in hosting the persecuted 1.1 million Rohingyas in Cox’s Bazar while having so many constraints such as loss of biodiversity and deterioration of law-order situation etc.

He appreciated the decision of Bangladesh Government of relocating some of the Rohingyas from Cox’s Bazar to Vashan Char as he found it conducive and safe for living.

He referred to several visits to Cox’s Bazar several times to supervise the construction work of 16000 make-shift homes in Cox’s Bazar.

He further made an observation that the living standard of Vashan Char will be apparently better than many parts of rural areas of Bangladesh.

The CDA further expressed appreciation on the progress of the process for draft agreement on mutual visa exemption for Diplomatic & Official passports which is ready to be signed and informed him that recently the Omani side has entrusted the under-Secretary of the Ministry of Foreign Affairs to sign the agreement at a mutually convenient time.