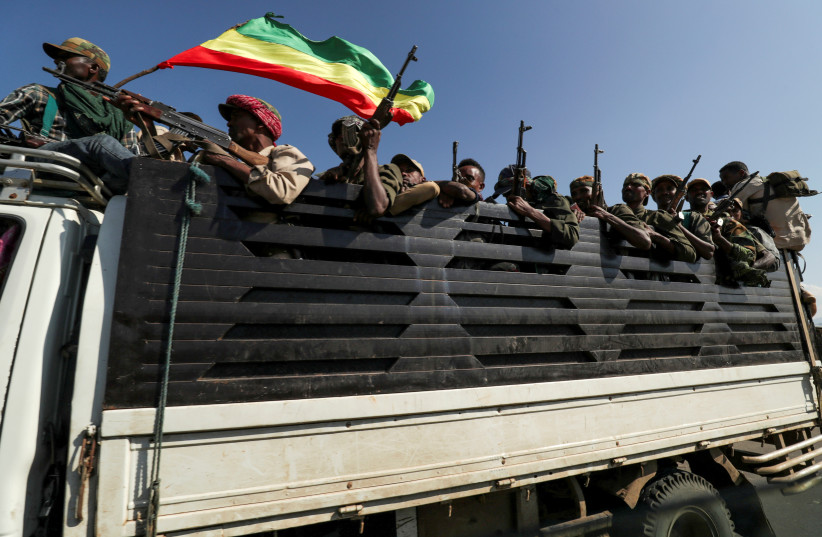 Ethiopia’s military killed 42 people allegedly among those responsible for massacring more than 100 civilians in a troubled western part of the country, local officials said on Thursday, reports AFP.

The federal troops also seized firearms and arrows during the operation, the government of the Benishangul-Gumuz region said, after gunmen waged the brutal pre-dawn assault on Wednesday in which dozens were also injured.

“The Ethiopia Defence Force has destroyed 42 anti-peace forces who attacked civilians yesterday” in the Metekel zone of Benishangul-Gumuz, the regional government said in a statement. Contests over land and resources in Benishangul-Gumuz have spurred violence between ethnic groups, and Wednesday’s massacre was just the latest gruesome atrocity in the region in recent months.

Ethnic violence has been a persistent problem under Prime Minister Abiy Ahmed, came to power in 2018 on the back of popular protests and was last year’s winner of the Nobel Peace Prize.

“The massacre in the Benishangul-Gumuz region is very tragic,” Abiy said in a Twitter post on Thursday, conceding the government’s efforts to solve the problem “had not yielded results”.

The government sent a “joint force” to the region “to solve the problem”, Abiy said, without elaborating on the composition of the deployment.

The Ethiopian Human Rights Commission (EHRC), a government-affiliated but independent body which first reported the massacre, said no security or police forces were stationed in the area when the attack occurred.

The attackers set fields and homes ablaze, burning people alive as they slept, the commission said.

“EHRC has repeatedly called for stronger collaboration between the federal and regional governments and a greater focus into the recurring nature of the attacks,” it said in a statement Thursday.

“Unfortunately, the attacks have since only increased in scope and frequency.” The commission said survivors had “disturbing photo evidence” of the attack, and reported civilians fleeing their villages in other parts of Benishangul-Gumuz, fearing the violence could spread.

Previous attacks in the Metekel zone include the slaughter of 34 in an assault on a bus in November.

Twelve others were killed in a separate attack in the zone in October, and 15 died in a similar assault in late September. Some leaders of the Amhara ethnic group, Ethiopia’s second largest, have asserted ownership of the Metekel zone—claims that have inflamed tensions with ethnic Gumuz in the area. Opposition politicians, notably Amhara, have in recent months been sounding the alarm about what they say is a targeted campaign by ethnic Gumuz militias against Amhara and Agew living in Metekel.

Amnesty International said Wednesday the latest violence “underscores the urgent need for the Ethiopian government to act to stop violence against ethnic minorities”.

Abiy, who has been under pressure to improve security in Benishangul-Gumuz and other regions of Ethiopia suffering repeated bouts of violence, visited Metekel on Tuesday and reproached those wanting to “divide Ethiopia along ethnic and religious lines”.

There is no known link between the violence in Benishangul-Gumuz and military operations in Ethiopia’s northern Tigray region. Thousands have been killed in the Tigray conflict, according to the International Crisis Group think tank, and more than 50,000 people have fled over the border into Sudan.