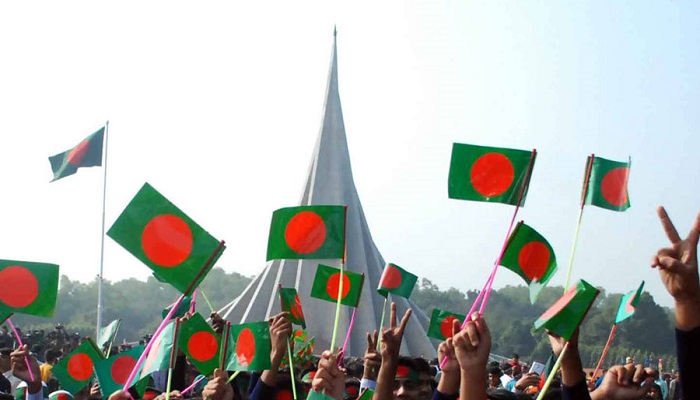 The nation is set to celebrate tomorrow the 50th Victory Day, the most precious day of the Bangalee people, as the country was liberated from the Pakistani occupation forces on the day 49 years back after a nine-month-long bloodstained War of Liberation.

On December 16 in 1971, Bangladesh was born as an independent country under the leadership of Father of the Nation Bangabandhu Sheikh Mujibur Rahman at the cost of supreme sacrifice of three million people and the honour of nearly half a million women.

Though the pandemic COVID-19 has almost paralysed the whole world barring the mankind from attending any public gathering in person, the celebration of the Victory Day this year has a different dimension as the day is set to be celebrated in the ‘Mujib Barsho’ on the occasion of the birth centenary of Father of the Nation Bangabandhu Sheikh Mujibur Rahman from March 2020-March 2021, just ahead of the country’s golden jubilee of independence to be celebrated in 2021.

President M Abdul Hamid and Prime Minister Sheikh Hasina issued separate messages on the eve of the day, paying glowing tributes to the martyrs of the Liberation War in 1971.

The government has taken elaborate programmes to celebrate the day at the national level, maintaining the health guidelines in face of the global pandemic COVID-19.

The programmes include a 31-gun salute, placing of wreaths at the monuments to pay homage to martyrs, hoisting of the national flags atop all government, semi-government and private offices as well as offices of autonomous bodies across the country, decorating city streets with miniature national flags and colourful festoons, and illumination of important buildings and establishments, roads and street islands at night.

On behalf of President M Abdul Hamid and Prime Minister Sheikh Hasina, rich tributes will be paid to the martyrs of the Liberation War by placing wreaths at the National Memorial at Savar with the rise of the sun.

This will be followed by the freedom fighters and their family members while Liberation War Affairs Minister AKM Mozammel Haque will lead them. Later, foreign diplomats, leaders of Awami League and different political and social organisations and people from all walks of life will pay tributes to the martyrs of the Liberation War.

However, the traditional parade with the participation of different contingents of Bangladesh Army, Navy and Air Force as well as Freedom Fighters’ contingent, Para-military forces and law enforcement agencies at the National Parade Ground on the victory day will not be held this year due to the COVID-19 pandemic.

Marking the day, a virtual discussion titled ‘Attaining the national prosperity through upholding the spirit of the Liberation War and ensuring the best use of digital technologies to build the ‘Sonar Bangla’ as dreamt by Father of the Nation Bangabandhu Sheikh Mujibur Rahman’ will be held tomorrow.

Posters based on the history of the Liberation War will be exhibited at Swadhinotastambha and the underground museum at the Suhrawardy Udyan here on the day. A limited number of visitors will be allowed to visit the exhibitions, maintaining the health guidelines.

Besides, essay competitions based on the Liberation War will be held using the digital platforms like e-mail or online while painting competitions for the children and virtual functions will be held at the educational institutions across the country.

Special prayers will be offered at mosques and other places of worship, seeking eternal peace of the departed souls of the martyrs of the Liberation War and good health for the injured freedom fighters as well as peace, progress and prosperity of the country.

Improved diets will be served to inmates of jails, hospitals, orphanages and vagrant homes across the country.

Similar programmes will be taken at upazila and district levels as well as at Bangladesh missions abroad to celebrate the day in a befitting manner.

Different socio-political, educational and cultural institutions and organisations have also chalked out a series of programmes to celebrate the nation’s glorious victory over the Pakistani occupation force.