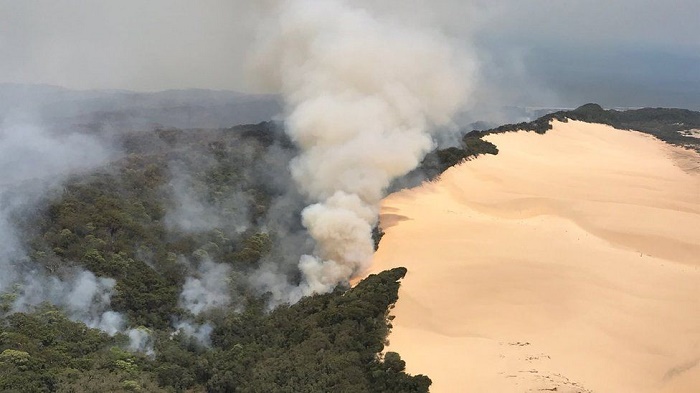 Firefighters are battling to keep a large bushfire which has come within 700 metres of a small township on an Australian holiday island at bay.

Dozens of residents of Happy Valley were earlier urged to evacuate as the blaze raged east across Fraser Island.

For six weeks, firefighters have been struggling to control the blazes on the island - a popular tourist destination off the coast of Queensland.

However efforts have been thwarted by a continuing heatwave and dry ground.

The bushfire was sparked by an illegal campfire in mid-October and has burnt through over half of the island - about 83,000 hectares.

Fraser Island is the world's largest sand island and listed as a Unesco World Heritage site.

It has a population of fewer than 200 permanent residents, some of whom were evacuated weeks ago alongside the tourists.

However, other residents - including many trained to fight bushfires - have stayed behind to defend their properties.

The Fraser Island fires are among the most serious blazes seen in Australia since its "Black Summer" last year.

The 2019-20 bushfire season was by far its largest and most intense on record and was driven by the increasing effects of climate change, scientists said.

What is happening on Fraser Island?

Authorities pushed Fraser Island's bushfire warning to emergency level late on Sunday and told residents in Happy Valley, on the island's east coast, to leave immediately as temperatures soared above 30C (86F) on the weekend.

On Monday, about 100 firefighters and more than 25 water-dropping planes were focusing efforts on containing the front racing towards the coast.

Firefighters are dropping massive loads of water and fire suppressant on the blaze, and deliberately burning bush around the town's perimeter to rid the area of any further fuel for the fire.

"At the moment, the fire front is around 700m away from the Happy Valley area, " said Queensland Fire and Emergency Services director Brian Cox on Monday morning.

"Hopefully the backburning operation combined with the air attack plans we have this morning will make a significant difference."

He said fire crews planned to repeated previous aerial operations by dropping a million litres of water on the blaze.

However, with a continuing forecast of strong winds and hot days, the only thing that would put out the huge fire would be rain, he said.

"We would like a lot of rain if possible," Mr Cox said. "[But] we are preparing for the worst and we're going to try to hit it with everything we have got today."

Other fires are also burning on the other side of the island at Kingfisher Bay, where residents have been told to be prepared to leave.

What happened in 'Black Summer'?

Last year, Australia's main bushfire season ran from September 2019 to March 2020. It was an environmental national disaster of unprecedented scale.

Every Australian state experienced the flare-up of blazes. Cumulatively, the thousands of fires scorched through an area of land twice the size of England.

At least 34 people died directly in the fires, which also burnt down more than 3,000 homes and killed or displaced about three billion animals.

Scientists say climate change led to the unprecedented intensity and scale of the fires, and the season came after a lengthy drought, particularly severe across south-eastern Australia.

The fires so were so large and intense, that in several cases they escalated beyond the scope of firefighting efforts to control them. The blazes only died out in late February and March after a lengthy spell of hard rain.

What can we expect from this season?

However, the Bushfire and Natural Hazard Co-operative Research Centre, which issues the annual national report, says this year will likely see a danger in "grass fires" as opposed to bush fires in the southern states like Victoria and New South Wales.

"Grass and crop fires are the main concern in these locations for the summer months as the growth dries out in the warmer weather," the report said.

It added that the "landscape and weather conditions" forecast, including the effects of a La Nina season, will "continue to be vastly different to the previous two years".