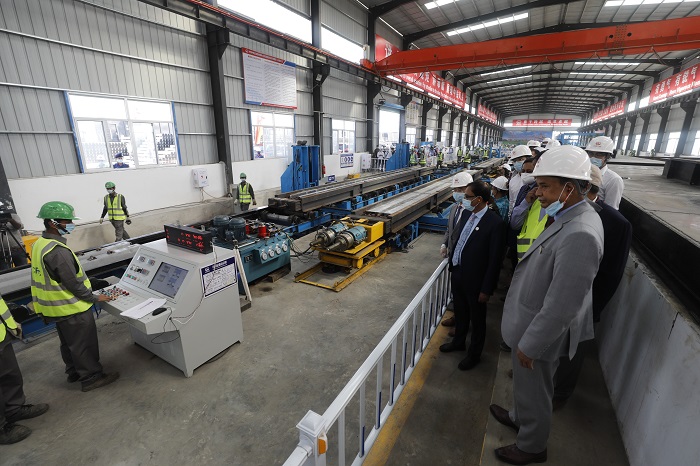 Railways Minister Nurul Islam Sujan looks at the machine and equipment after inaugurating the railway slipper manufacturing plant at Bhanga upazila of Faridpur district on Wednesday.

Bangladesh Railway has begun manufacturing concrete sleepers for the rail link project connecting to Padma Bridge at the largest factory of its kind in the country with the most advanced equipment, standardisation and automation.

The factory located in Bhanga upazila of Faridpur will manufacture 370,000 units of concrete sleepers required for the Padma Bridge Rail Link Project (PBRLP). The estimated daily production at the factory is 500 units.

Chinese firm CREC provided technical support to the operations and automation of the factory to produce sleepers combining Asian and European standards.

Railway Minister Nurul Islam Sujan was the chief guest at the inauguration of the sleeper factory near Bhanga Railway Station in Faridpur on Wednesday.

The sleeper factory is capable to independently produce more than a dozen kinds of sleepers including 1,676 mm ballasted broad gauge (BG) sleeper, ballast-less broad gauge sleeper and dual gauge sleeper, which is currently used in Bangladesh.

Padma Bridge Rail Link Project is located in the Middle Western part of Bangladesh. It will be the most important corridor for passenger and freight transportation between the east and the west of Bangladesh.

The rail route starts from the existing Dhaka station, goes through Mawa, Padma Multi-purpose Bridge (under construction) and Bhanga, and ends in Jashore.

The total length of the new line is approximately 168.8 kilometres. PBRLP is also the biggest government to government (G2G) infrastructure project in Bangladesh, financed by the China Exim bank.

The sleeper factory serving for the PBRLP is built by CREC, the Contractor of PBRLP. The factory covers an area of 1.815 acres, with 104 sets of moulds, 16 stations, 6 steam curing pits and 2 sky cranes put into use.

Railways Minister Nurul Islam Sujan expressed his appreciation to CREC as an internationally reputed contractor that has achieved remarkable and commendable progress during this pandemic period.

Wang further mentioned that the sleeper-laying base is currently employing around 200 local men who have undergone proper professional training by senior Chinese experts of CREC.

Earlier on August 22, the sleeper factory began production on a limited scale.