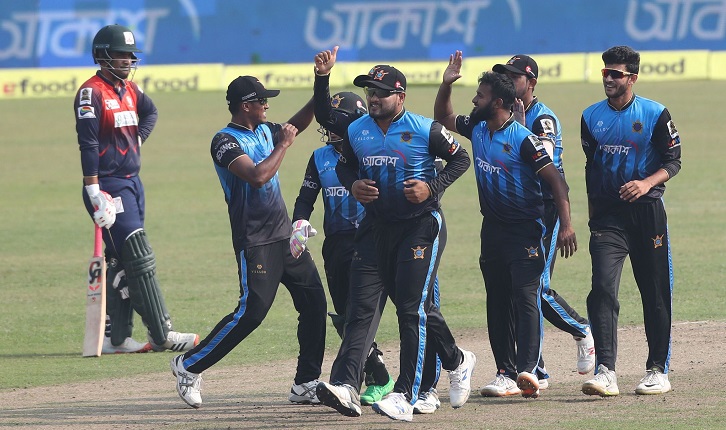 After holding back the opponents cheaply, Dhaka who lost three straight games so far, sniffed a chance to end their losing trend.

Robi was ably supported by Shafiqul Islam who with economical bowling effort grabbed 2-10 while Rubel Hossain and Nayeem Hasan bagged one wicket apiece.

Young Towhid Ridoy was the highest scorer for Barishal with run-a-bal-33 while captain Tamim Iqbal made 31 off 31.

Despite Tamim’s decent start, Fortune Barishal who was sent to bat first, couldn’t get the expected start as the other opener Saif Hasan was dismissed for 9.

But the situation worsened when the two top order batsmen Parvez Hossain Emon and Afif Hossain got dismissed with naught. Cheap dismissal of top three batsmen left Barishal to precarious 28-3.

Tamim and Ridoy tried to regain the control but Robi took the prized scalp of the captain, ruining Barishal’s chance to get back to the game.

The lower order however couldn’t give Ridoy the adequate support and they eventually were restricted to a total that looked not so good.