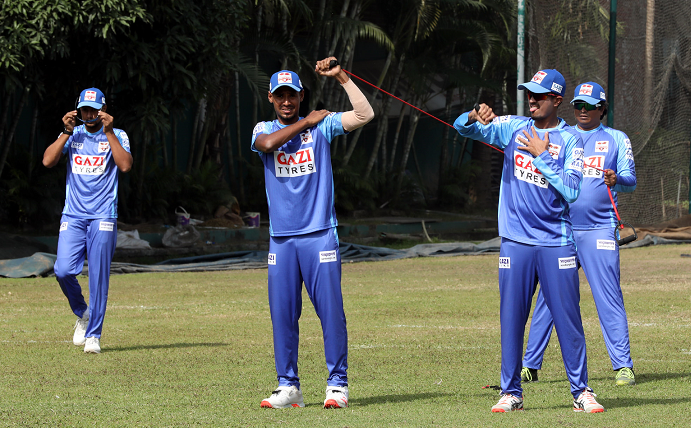 Gazi Chattogram are eyeing to make a perfect start as they are all set to begin their campaign in the Bangabandhu T20 Cup by taking on Beximco Dhaka at Sher-e-Bangla National Cricket Stadium on Thursday.

In the second match of the day, two unbeaten teams of the opening day will lock horns as Gemcon Khulna and Minister Rajshahi are pitted against each other.

Dhaka lost the opening game to Rajshahi by two runs while Gemcon earned a stunning win over Fortune Barishal in the other match, courtesy of four sixes by Ariful Haque in the last over against Mehedi Hasan Miraz.

Dhaka skipper Mushfiqur Rahim insisted after the loss that they need to bowl better while the batsmen need to stay till the end if they want to achieve success in the remaining matches of the tournament.

“I think we did not bowl well. I don’t think we started well, we did well in the middle and then Sohan and Mahedi batted well in the end. I think our bowlers could not bowl according to the plan,” he added.

“It was important to elongate the innings but we couldn’t do that, which was another reason behind our defeat. Me, Akbar and Naim were set in the crease but we couldn’t capitalise on it,” he said.

“The match was in our hands but they bowled well at the end. Me and Akbar got dismissed at a crucial time and it was difficult for a new batsman to hit from the beginning in this kind of wicket,” he remarked.

Chattogram skipper Mohammad Mithun said that they are confident that they are capable of beating any side on their day while added that now they need to play according to their potential.

“I am very happy with the side. We are a very balanced side and now we need to perform in the middle,” said Mithun who is expecting a high-scoring affair at Sher-e-Bangla National Cricket Stadium.

“I think the wicket is good and if it remains this way we can expect high scoring matches,” he said.

Mithun, whose appointment as captain was nothing short of a surprise, said that he wants to take it match by match in the tournament while added that the way things turned out in the opening day, the notion of pre-tournament favourites has completely vanished.

“I am privileged to lead the side but I want to take it match by match,” he said,

“The way things took a turn in the middle yesterday (Tuesday) only proves that you need to perform in the middle no matter which team you are playing against,” he said.

While Dhaka and Chattogram had full-fledged training session at BCB Academy premises it was not the case with the two teams who have won their match in the opening day as they were more inclined to hone the skill of their bench strength.

Rajshahi’s assistant coach Rajin Saleh praised Mehedy Hasan for his match winning performance while added that their win against Dhaka will give them confidence in the tournament.

The young off-spinner kept his cool to guide his team to a two-run win as he restricted Muktar Ali from scoring required 9 runs in the last over as a result Dhaka ended up putting 167 runs for 5 wickets in 20 overs chasing 170 runs to win.

Batting at No 7, Mahedi blasted 50 runs off 32 balls, hitting 3 fours and 4 sixes, which not only rescued Rajshashi from a precarious 65 runs for 5 wickets but also guided them to a respectable 169 runs losing 9 wickets.

“I think Mahedi’s performance was a positive thing for our team and we feel it will be helpful for our team in the next match,” said Rajin.

“We are taking confidence from the win against Dhaka and looking forward to keeping the momentum,” he said adding that though Ashraful could not blaze in the opening game he is confident he is just a game away from regaining his form.