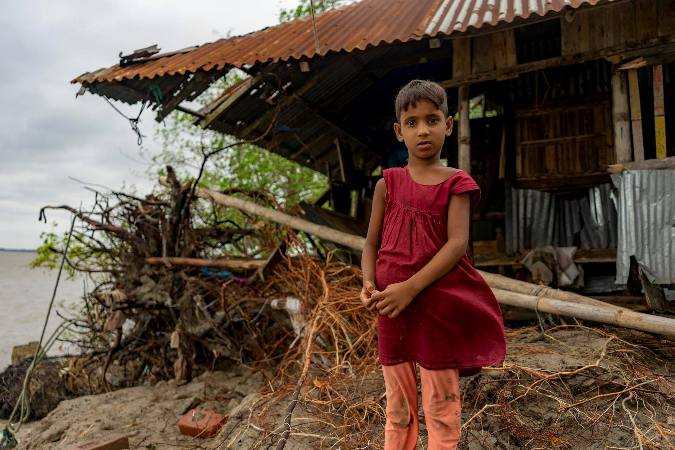 Bangladeshi children sounded the alarm on climate change, and called for urgent action at a historic Children’s Climate Summit.

The Summit held on Friday culminated in the adoption of a Children’s Climate Declaration, which was presented to national leaders in the spirit of intergenerational solidarity.

In the Declaration, the children call for decision makers to reduce pollution and greenhouse gas emissions; to invest in education, training and a green economy; and to protect children against the impacts of climate change, said the UNICEF on Sunday.

Over 1 million children were engaged in preparations for the Children’s Climate Summit as part of the UNICEF Generation Parliament digital platform, which connects children to policies and decisions that impact their future.

The virtual Summit, hosted by UNICEF, brought together 300 “child parliamentarians” representing all constituencies in Bangladesh to debate climate issues, policies, and actions to safeguard their future.

“Our country is on the front line of climate change. Sea level rise, erosion, pollution and extreme weather jeopardize our survival, wellbeing and future. Children must be consulted on policies and decisions that impact our future. There is no time to lose,” said Ridwana Islam (15), a Child Parliamentarian from Dhaka.

“The climate emergency requires bold leadership as we battle against the clock. We must look to children and young people for inspiration, courage and vision.

UNICEF works to facilitate Bangladeshi children to be part of a societal decision-making process on climate change-related issues as they directly impact their future,” said Tomoo Hozumi, UNICEF Representative in Bangladesh.

The Summit was chaired by Mr. Shamsul Hoque Tuku, Member of Parliament (MP) and President of the Parliamentary Caucus on Child Rights, and was attended by child climate activists, parliamentarians and climate stakeholders from across Bangladesh, as well as by the Government, civil society and the development community.

“Today children have taught us that our youngest citizens should play key role in shaping climate policy. It will be my pleasure if I could make a commitment to the Children’s Climate Declaration in the near future at the Parliament,” said the Deputy Speaker of the Parliament, Fazle Rabbi Miah, MP.

Together, the children delivered a clear message to Bangladeshi leaders: “Our futures are intertwined and our planet is shared. We must act now to confront the climate crisis and we, the children, must be part of the solution.”