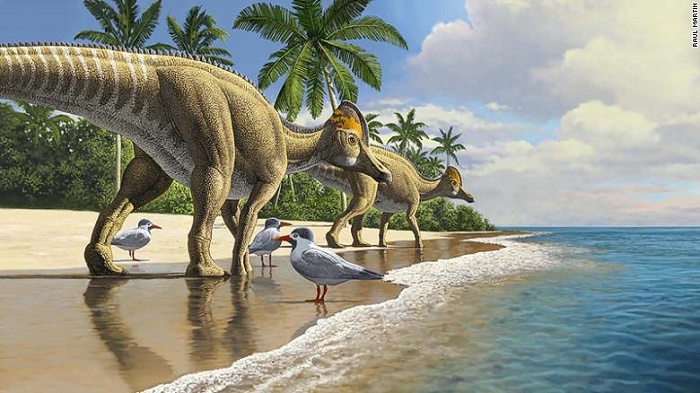 Fossils of a duckbill dinosaur have been discovered in Africa, leading experts to believe the species once traveled hundreds of kilometers across oceans to reach the continent.

The new dinosaur, Ajnabia odysseus, a member of the plant-eating duckbill dinosaur family, was discovered in rocks in a mine in Morocco, dating back some 66 million years to the end of the Cretaceous period.

Though some duckbill dinosaurs could reach up to 15 meters (49 feet) long, experts say that Ajnabia was comparatively tiny, measuring the size of a pony at three meters (10 feet).

Experts were puzzled at how the dinosaur ended up in Africa, which was an island continent and completely isolated by deep sea during the Late Cretaceous.

Nicholas Longrich, a senior lecturer at the Milner Centre for Evolution at the University of Bath, who led the study, described the discovery of the fossil as "about the last thing in the world you would expect."

"It was completely out of place, like finding a kangaroo in Scotland. Africa was completely isolated by water -- so how did they get there?" Longrich said in a statement.

After studying Ajnabia's teeth and jawbones, experts determined that it belonged to the Lambeosaurinae subfamily.

Experts say the lambeosaurs evolved in North America, before spreading over a land bridge to Asia, and colonized Europe and then Africa, which was surrounded by deep oceans.

Experts believe the duckbills, with their large tails and powerful legs, must have crossed hundreds of kilometers of open sea to reach the continent, by rafting on debris, floating, or swimming.

"Sherlock Holmes said, once you eliminate the impossible, whatever remains, no matter how improbable, must be the truth," said Longrich. "It was impossible to walk to Africa. These dinosaurs evolved long after continental drift split the continents, and we have no evidence of land bridges. The geology tells us Africa was isolated by oceans. If so, the only way to get there is by water."

Studies have shown that mammals, including monkeys and rodents, have made long and treacherous sea crossings from continent to continent before.

But the the team of researchers, led by the University of Bath with researchers from Spain, the US, France and Morocco, believe it is the first time an ocean crossing has been suggested for dinosaurs.

The findings were published in the journal Cretaceous Research.