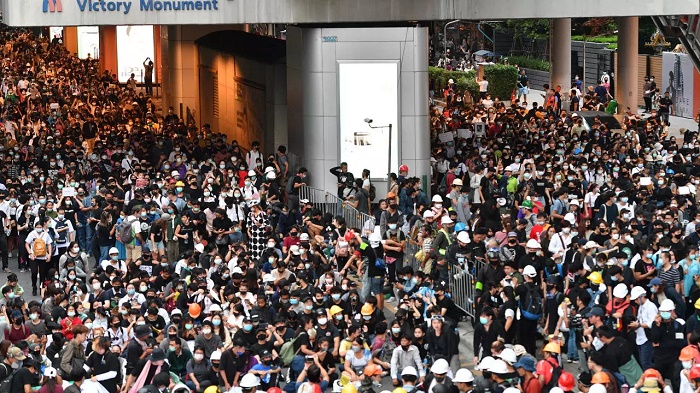 Thailand's premier revoked an emergency decree aimed at quelling pro-democracy protests on Thursday after it failed to stamp out daily rallies demanding his resignation and reforms of the unassailable monarchy.

The student-led pro-democracy movement has been gaining momentum since mid-July, with mostly young demonstrators calling for Premier Prayut Chan-O-Cha's removal and a rewrite of a 2017 military-scripted constitution.

Some protest leaders have also issued controversial demands to reform the ultra-powerful and wealthy monarchy, whose influence permeates every aspect of Thai society.

The "severe" emergency measures were imposed last week after anti-government protesters flashed a three-finger salute to a royal motorcade -- an unprecedented challenge to the monarchy.

But the ban on gatherings of more than four people failed to discourage tens of thousands of demonstrators who have amassed daily around major Bangkok intersections to call for Prayut to step down.

The former military chief -- who masterminded the 2014 coup and has held onto power since -- had indicated late Wednesday he was preparing to lift the state of severe emergency.

Government mouthpiece the Royal Gazette said the measures had been lifted since 12 pm (0500 GMT).

"All conditions set under the severe state of emergency have been stopped," it said.

Besides banning gatherings of more than four people, the measures gave the police carte-blanche to arrest protesters and seize electronic materials believed to threaten national security -- a move that has drawn widespread public condemnation.

Prayut had said Wednesday in a televised addressed that the country must "step back from the edge of the slippery slope that can easily slide to chaos".

The parliament -- which is in recess -- has been recalled for a special session on Monday in a bid to resolve the crisis.

Thailand has seen more than a dozen coups since the end of royal absolutism in 1932, the latest in 2014.

Its arch-royalist army, which positions itself as a protector of the monarchy, claims that such interventions are necessary to protect the king.