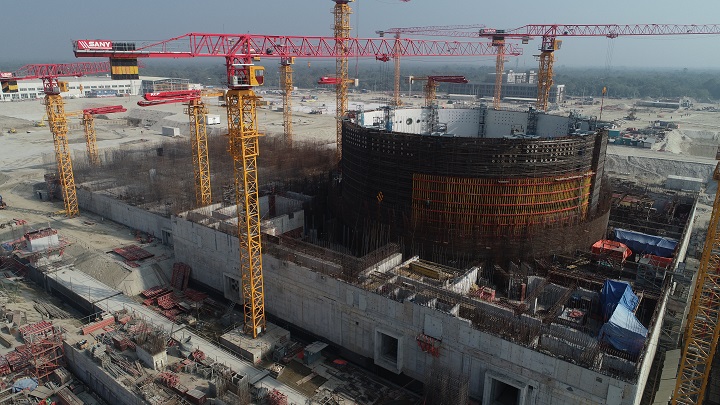 Uncertainty looms large over the timely execution of a slew of power transmission projects aimed at facilitating electricity evacuation from the upcoming 2,400 MW Rooppur Nuclear Power Plant (RNPP). The reason — the Indian financing agency is taking "excessive time" to give a go-ahead for the bidding process, UNB has learnt.

Dhaka signed a $1.06 billion loan agreement with New Delhi in 2017 over financing of these projects, with a target to implement them within 2022, as the 1,200 MW first unit of RNPP aims at starting commercial production from the first half of 2023.

Official sources said the 464 km 400 kV Transmission Lines project has been divided into four packages for easy and quick implementation. These are the 102 km Rooppur-Bogra line, the 144 km Rooppur-Gopalganj line, the 147 km Rooppur-Dhaka line, and the 51 km Aminbazar-Kaliakoir line.

Official sources at PGCB said though they have completed the bidding process for some packages of the transmission projects, the remaining are stalled due to the delay in getting clearance from the Indian financing agency.

“Of these packages, the bidding for the most critical river crossing work and bay extensions are suffering due to India's bureaucratic red tape. The necessary approval from India Exim Bank is still awaited," said a top official of PGCB, who did not wish to be named.

When contacted, PGCB managing director Golam Kibria admitted the delay in the projects' bidding processes. "But I am hopeful of quick clearance from the Indian financing agency," he said.