JU students protest against rise in rape across the country 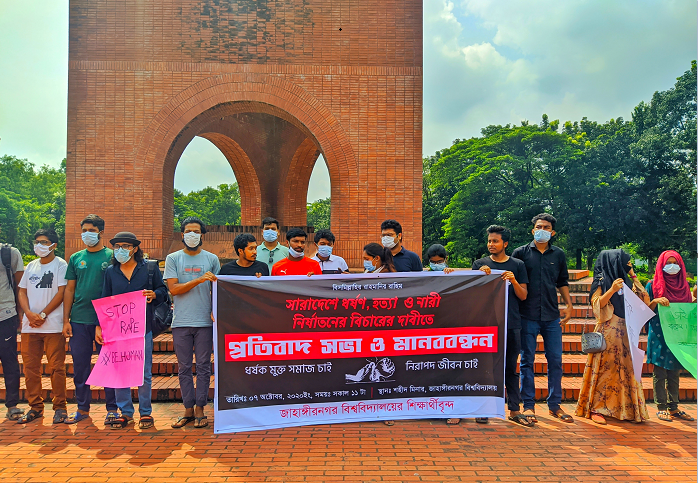 The students of Jahangirnagar University (JU) on Wednesday staged demonstration on the campus protesting the cumulative swelling of rape and sexual abuse incidences across the country.

Around at 12.00 pm, over hundred students of different departments and institutes formed a human chain on the central Shahid Minar premises at the university to protest rape, murder and violence against women.

Later, they brought out a procession from the central Shahid Minar that ended on the Dhaka-Aricha highway adjacent to the main gate of the university following a brief rally. They chant anti-rape slogan during the march and holds placards demanding exemplary punishment to the rapist.

The students placed a total five-point demand including the maximum punishment for rape is death penalty, expelling government bureaucrats if they are accused over sexual harassment and canceling all government benefits allocated to their family and judicial proceedings in rape cases to be started within 30 days.

Earlier, on Tuesday night, students of the university under the academic session 2016-17 (46th Batch) gathered at the university`s main gate area for a candle-light vigil protesting the recent rape incidents across the country.