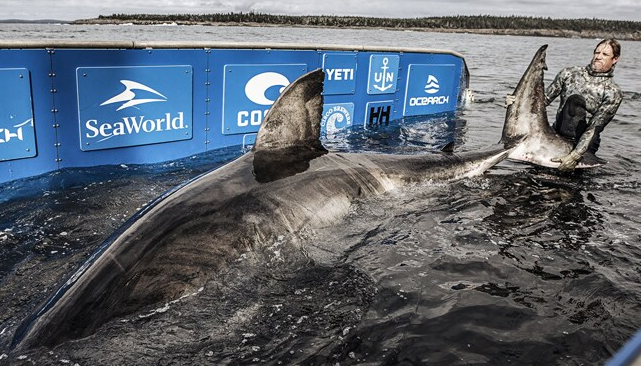 A team of researchers in Canada has tagged a great white shark measuring more than 17 feet in length. Dubbed "Queen of the Ocean", the shark was discovered by a team from non-profit organisation Ocearch in Nova Scotia, Canada, on Friday, reports The Mirror.

At 17 feet 2 inches long, she is the largest shark that the organisation has ever tagged.

"She is a very old creature, a proper queen of the ocean and a matriarch. She has all the scars, healed wounds and discolourations that tell a deep, rich story of her life going back years," Ocearch expedition leader Chris Fischer was quoted as saying by Yahoo News.

The group named the shark "Nukumi" (pronounced noo-goo-mee) after the legendary wise old grandmother figure of the Native American Mi'kmaq people. Nukumi weighs a whopping 3,541 pounds - which is slightly over 1,600 kilograms.

The group also shared a video of the shark - and their posts have gone viral on the social media platform.