Navalny blames Putin for poisoning, vows to return to Russia 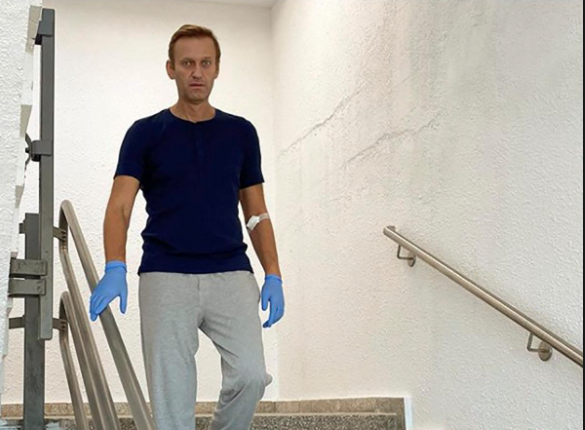 Kremlin critic Alexei Navalny told a German magazine he believed Russian President Vladimir Putin was behind his suspected poisoning, but said he was not afraid and would return to Russia to resume campaigning.

Navalny was flown from Russia to Berlin in August after falling ill on a domestic flight. He received treatment in the Charite hospital for what Germany said was poisoning by a potentially deadly nerve agent, Novichok, before being discharged in September.

“I believe that Putin is behind the crime and I don’t have any other versions of what happened,” Navalny told Der Spiegel, according to an extract of an interview due to be published later on Thursday.

The West has demanded an explanation from the Kremlin, which has denied any involvement in the incident and said it has yet to see evidence of a crime.

“You don’t feel any pain but you know you’re dying,” Navalny said of the moment that the nerve agent began to take effect on him. He said he was making a steady recovery and was now relearning how to balance on one leg.

Navalny was accompanied on his visit to the magazine’s office by security guards, who insisted they should choose which bottle of water from the fridge he should drink. His allies have said traces of Novichok had been found on a bottle of water he drank in his hotel room before taking the flight.

Navalny told Der Spiegel he would return to Russia, adding: “My task is now to remain fearless. And I have no fear! If my hands are shaking, it’s because of the poison, not out of fear. I will not give Putin the gift of not returning.”

He and his wife are currently living in a rented flat in Berlin, but he said he would only resume posting to his popular online video channel once he was back in Russia. “I do not want to be the opposition leader in exile.”

The politician, who was visited at his hospital bedside by Chancellor Angela Merkel, said he felt a personal bond to Germany and had been impressed by Merkel’s deep knowledge of Russia.

“My impression is that Merkel needs no advice from me,” he said. “But any Russia strategy must account for the depth of madness that Putin has now reached,” adding that the times were past when “Putin would not risk a conflict with Berlin”.