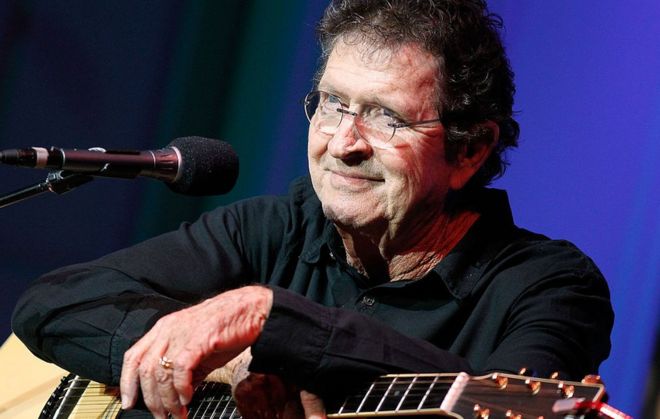 Mac Davis, the country songwriter who penned In The Ghetto and A Little Less Conversation for Elvis Presley, has died at the age of 78.

A household name in the US, he had his own TV show in the 1970s and a string of solo hits, including the number one single Baby Don't Get Hooked On Me.

He also appeared on TV shows like Fargo and Murder, She Wrote; and in his later years, he made a club hit with Avicii.

"Mac Davis has been my client for over 40 years, and, more importantly, my best friend," said Morey in a statement.

"He was a music legend, but his most important work was that as a loving husband, father, grandfather and friend. I will miss laughing about our misadventures on the road and his insightful sense of humour.

"When there was a tough decision to be made, he often told me, 'You decide.. I'm going to the golf course!'"
Born Scott Davis on 21 January, 1942, the singer-songwriter grew up in Buddy Holly's hometown of Lubbock, Texas.

He began performing in local rock bands in his teens, but didn't achieve success until he moved to Los Angeles and signed to Nancy Sinatra's publishing company.

There, he wrote songs for artists including Glen Campbell, Bobby Goldsboro, and Kenny Rogers. In 1968, Elvis Presley recorded Davis's composition A Little Less Conversation and, liking what he heard, asked the writer to contribute a song to his comeback special.

Ghetto inspiration
"They had asked for a song about looking back over the years, and oddly enough, I had to write it in one night," he later recalled. "I stayed up all night at Billy Strange's house in Los Angeles. He had a little office set up in his garage. I wrote it right there."

The song was Memories, which became Davis' first top 40 hit. He and Presley followed it up with In The Ghetto, a haunting track about racial inequality, which Elvis took into the top five in 1969.

Davis recounted the writing of the song in 2009, saying it was inspired by his childhood friend, Smitty Junior - the son of a black labourer who worked for his father.

"Smitty Junior, was my age and he and I used to play together," he told American Songwriter. "Our daddies would be working, and in the summertime, Smitty would hang out with me. They lived in a really funky dirt street ghetto.

"They had dirt streets and broken glass everywhere. I couldn't understand how these kids could run around barefoot on all that broken glass; I was wondering why they had to live that way and I lived another way."

Davis said the song was about the cycle of poverty, and "being born into a situation where you have no hope".

"If you listen to the song, it's more poignant now than it was then. Instead of getting better it's gotten worse. Back then we had gangs and violence in a few cities, now we have it in almost every American city."
In The Ghetto became a pop standard, and has since been covered by more than 150 artists, including Dolly Parton, Sammy Davis Jr and Nick Cave.

Its success also enabled Davis to sign his own recording contract, and he scored several hits during the 1970s - including Whoever Finds This, I Love You; Baby, Don't Get Hooked on Me; and Stop and Smell the Roses.

Hall of Fame
His signature song was I Believe in Music - a spiritual ode to the unifying power of melody, which he wrote at a party thrown by British singer Lulu and her then-husband Maurice Gibb of the Bee Gees.

"I went to the kitchen and fixed myself a drink at the party, and there were a bunch of hippie types and they were gonna have a séance," he later recalled.

"Then someone asked, 'Don't you believe in the occult?' I said, 'No man, I believe in music.' And the second I said it. I looked around [and] I saw one of Maurice Gibb's guitars sitting on a stand, and I picked it up and started strumming it. I had the hook before I left."

With his songs hitting both the pop and the country charts, Davis became one of America's most popular entertainers. Between 1974 and 1976, he hosted a musical variety show for NBC television, followed by a string of TV specials and a stint on The Muppet Show.

In 1979, he also starred in the film North Dallas Forty with Nick Nolte; but his role in the notoriously dreadful The Sting II (made without the involvement of original stars Paul Newman and Robert Redford) effectively ended his Hollywood career four years later.

He later appeared on Broadway in The Will Rogers Follies, and worked as a songwriter into his twilight years, writing hits with Dolly Parton, Bruno Mars and Rivers Cuomo of Weezer.

At the age of 73, Davis scored a global hit after co-writing Addicted To You with Swedish dance producer Avicii; to whom he had been introduced by his golf partner - who also happened to be head of repertoire at Interscope Records.

The veteran was full of praise for the young DJ, who died in 2018, calling him a "genius".

"He was great to work with," Davis told Songwriter Universe. "He sits down with a little laptop computer, and he makes noise come out of there that's just unbelievable to me. I wish I could do it. He can make a whole orchestra from out of his computer it's pretty amazing."

Davis continued to work into his late 70s, and filmed his last acting role in 2019, playing a preacher in Dolly Parton's Netflix series, Heartstrings.

Morey said the musician had died "surrounded by the love of his life and wife of 38 years, Lise, and his sons Scott, Noah and Cody".

He will be buried in his home town, wearing denim - fulfilling a promise he made in his 1974 hit single Texas in My Rearview Mirror: "And when I die, you can bury me in Lubbock, Texas in my jeans."