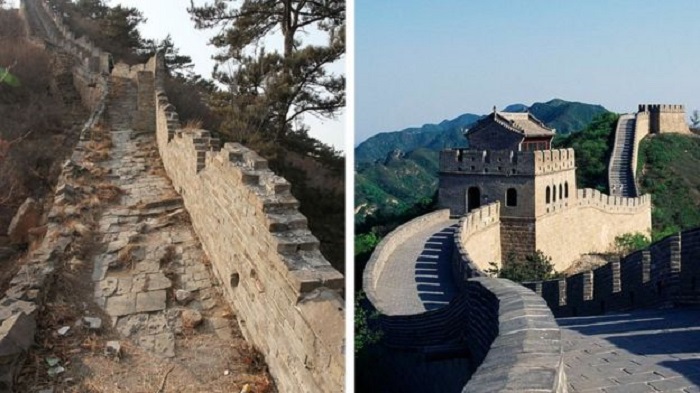 As China's busiest holiday season approaches, Beijing has warned that it will punish those who climb the "wild Great Wall".

The term is often used to describe parts of the famous landmark that are not restored and closed to tourists.

Fines will be enforced more strictly over Golden Week, with thousands of domestic tourists expected to visit.

China is banking on the holiday to boost its badly hit tourism industry.

It will also be stepping up security, with a Beijing Daily report saying that all 131 guards usually stationed along the Great Wall would be on duty over Golden Week.

Authorities are also proactively scouring social media to see if any "wild Great Wall" expeditions are being organised.

Mr Yu said that some sections of the Great Wall are very steep - and it is possible for tourists to get lost or fall off. Authorities also said climbing these parts can cause damage to the historic site.

The parts of the Great Wall that are open to tourists are just a small section of the famous landmark, which stretches for thousands of kilometres.

Other parts of the structure are left in their original state, though China had earlier announced that a restoration project was in the works.

Hundreds of millions of Chinese people are expected to travel over Golden Week - fuelled by a pent-up demand after months of coronavirus restrictions.

Typically, hundreds of thousands of Chinese tourists travel abroad over the eight-day holiday period - but this year, with travel restrictions in place, its likely that domestic tourism will soar.

China appears to have largely stopped the spread of the virus, and most restrictions have been lifted.