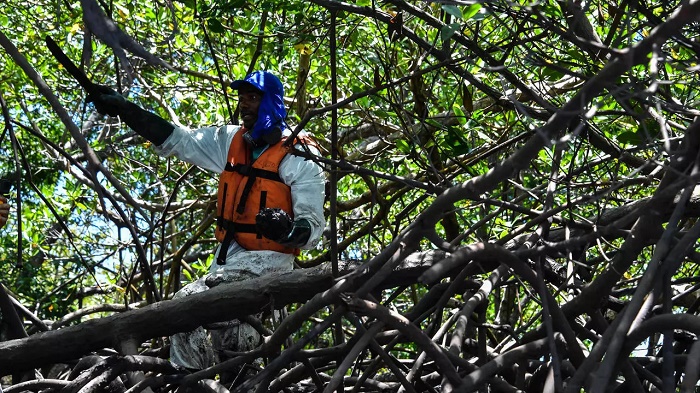 Ruling a day after a decision to eliminate so-called “permanent protection zones” along Brazil’s Atlantic coast, Federal Judge Maria Carvalho granted a request from a group of lawyers for an injunction against the move, “given the obvious risk of irreparable damages to the environment,” she said.

The protected areas were created in 2002 to preserve Brazil’s many tropical mangroves and the sand-dune scrublands known as “restinga.”

The regulations bar development within 300 meters (yards) of the high-tide line in such areas, a rule that repeatedly tripped up developers of beachfront hotels and condominiums.

Environmentalists had warned that rolling back the regulations could have catastrophic impact.

The head of the environmental group SOS Mata Atlantica, Mario Mantovani, told AFP Monday that the move was “a crime against society.”

The blocked repeal is the latest in a series of environmental controversies for Bolsonaro, a far-right climate-change skeptic who has presided over a surge in deforestation and fires in the Amazon rainforest and Pantanal wetlands since taking office in January 2019.

The decision was made at a meeting of the National Environmental Council (Conama), which is presided over by Environment Minister Ricardo Salles.

The council brings together government officials, environmental groups and business associations, but the administration has dramatically changed its composition.

Last year, the government issued a decree reducing the number of council members from 96 to 23, giving its own members more weight.

In other decisions on Monday, the council also repealed a measure requiring environmental permits for irrigation projects and authorized cement companies to burn empty pesticide containers to recycle them in concrete, a practice environmentalists say is highly polluting.

Salles has a knack for stirring up controversy.

In April, a video recording was made public of a cabinet meeting at which the environment minister said the coronavirus pandemic was an opportunity to roll back regulations “now that the media’s only talking about Covid.”