‘Hide your faces behind masks’: BNP to AL leaders 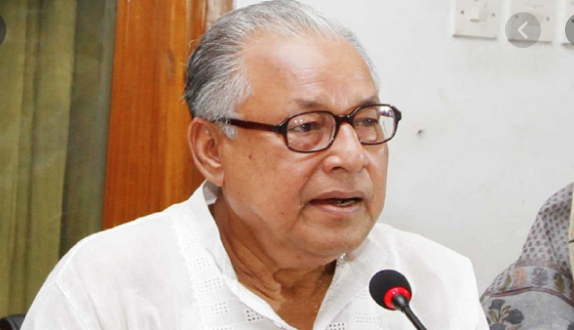 Stating that the government has ‘got infected with various viruses’, BNP senior leader Nazrul Islam Khan on Tuesday suggested the ruling party leaders to ‘hide their faces behind masks to hide the shame for the widespread corruption and violence against women’.

"The government is infected not only with Covid-19, but also with some other viruses. The way misdeeds and corruption have spread in the country like viruses, people belong to the government and the ruling party should wear masks to prevent corruption virus alongside coronavirus one,” said BNP standing committee member Nazrul Islam Khan.

Speaking at a human-chain programme, he said, "The people of this government should also wear another mask to evade the virus of violence against women that has recently spread like an epidemic. Wearing these three masks, they can cover their faces to avoid embarrassment.”

Bangladesh Smmalita Peshajibi Parishad arranged the programme in front of the Jatiya Press Club protesting repression on a woman at Sylhet MC College and some other recent incidents.

Referring to the arrest of Abdul Malek, a driver of the Directorate General of Health Services (DGHS), on charges of amassing huge wealth illegally, Nazrul said it has depicted how badly corruption has spread everywhere. “He (Malek) is one of the richest drivers in the world. People are now writing posts on social media that they want to be drivers.”

Speaking at the programme, Nagorik Oikya convener Mahmudur Rahman Manna voiced deep worries over the rise in rape incidents all over the country.

“Our Prime Minister yesterday (Monday) said she wants to serve people more. You’ve been serving people for 12 years in such a way that your golden boys (BCL men) are picking girls up from roads. There’re two rape incidents in Chittagong yesterday and the same incident also took place in Narayanganj. So, you (PM) please forgive us, and we don’t want your service,” he said.

Manna said mothers and sisters are now not safe in the hands of the ruling party’s student body Bangladesh Chhatra League (BCL). “Before going anywhere on a tour, people now need to know whether Chhatra League men are there.”

He called upon all to get united to restore people’s rights and democracy by ousting the current ‘unelected’ and ‘usurper’ regime.