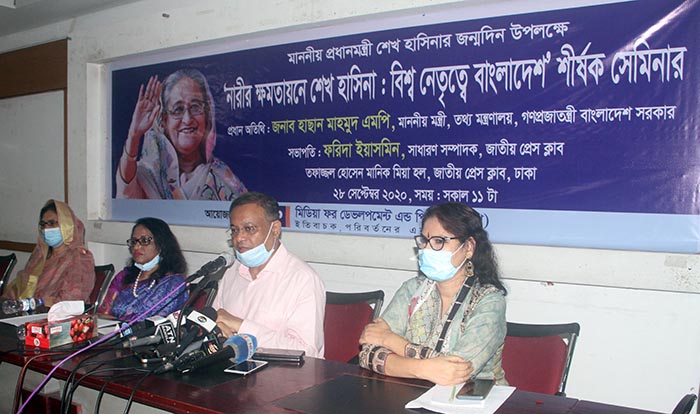 Information Minister Dr Hasan Mahmud said Bangabandhu’s daughter Sheikh Hasina symbolises an only name who stays beside masses and leads the nation in every crisis, struggle, development and advancement.

“Today is the 74th birthday of Bangabandhu’s daughter Sheikh Hasina. Her life is an episode of struggle. She (Sheikh Hasina) stays beside the people in every crisis, development, movement and achievement,” said Hasan, addressing a seminar at the auditorium of Jatiya Press Club (JPC) in the capital.

The information minister said the intriguers tried to kill incumbent Prime Minister Sheikh Hasina 19 times and they are still hatching conspiracies one after another to serve their ulterior motive.

He said Sheikh Hasina never got upset after returning from the death-valley every time, rather she (Sheikh Hasina) moved forward with more strength and courage.

“She has established democracy and the rights of people to vote. Bangladesh is now self-reliant in food and the country has been turned into a middle income nation from least developed one. Bangladesh is now a role model of development before the world. The example set up by Bangladesh in achieving socio-economic development is universally accepted and recognized today in the world community,” he added.