How to both work and school from home 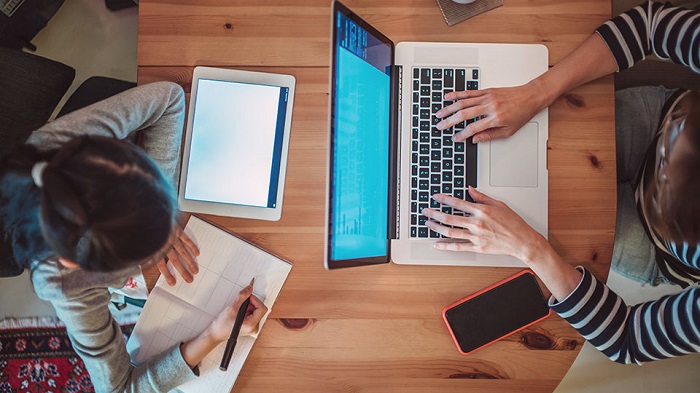 In March, several days before the coronavirus pandemic brought New York to a halt, Mary Ausman, a parent and church educational coordinator, moved with her husband, their two sons and two dogs from a house in the Riverdale neighbourhood of the Bronx to a 600-square-foot apartment in Hell’s Kitchen.

The family wanted their younger son, Alex, 10, a student at the School of American Ballet in Midtown, to be able to walk to dance rehearsals and acting auditions, and looked forward to living in a more central location.
Then everything shut down, and the Ausmans began living, working and learning in the same space.

Alex’s ballet barres rest against a wall in the kitchen; each member of the family has set up a small work space facing a different wall of the apartment. Without a change of location, the hours tend to bleed together. “It’s a never-ending day,” Ausman said.

A similar scene unfolded in homes across the country, as parents spent the spring balancing their jobs and the demands of their children’s remote schooling. Now, those who are able to continue working from home are preparing to do it again.

It’s daunting, managing the elements that add to what psychologists call the “mental load”: remote schooling, as well as a career, household tasks and the invisible work that all place demands on a parent’s time. “How do we accept the fact that there may be too many things to get done in the day?” said Lauren Knickerbocker, a child and adolescent psychologist at NYU Langone Medical Centre. “People get really caught up in the idea that they’re going to get all these things done and get them all done perfectly. I think that ends up being a disaster.”

Preparing for a new semester is also expensive: The National Retail Federation projects that back-to-school spending will increase to $33.9 billion this year, up from $26.2 billion last year, given the additional costs of outfitting a home classroom. Here’s how some experts suggest setting apart the physical and emotional space — and how families are making it work.

Start by structuring your physical environment so that it’s easy for you and your children to switch on for work or school. Where you work, and even what you wear, helps signal to your brain what mode you’re supposed to be in, according to Donald M Rattner, a New York-based architect who specialises in home and office spaces that increase productivity and the author of the book “My Creative Space.” If you can, put school or work stations near natural light sources; they help make a room feel larger than it really is. “When your space feels open, your mind tends to be more open to new ideas,” Rattner said.

Work spaces can be found in some unexpected locations, though. Kristina Ortega, a teacher and parent in Los Angeles, set up her two elementary-school-age sons in their small garage (which had previously been used as a playroom and a laundry room) with some small upgrades.

As with everything these days, there are no rules. “I think the only room we haven’t taught or learned from is the bathroom,” Ortega said.

If separate spaces aren’t built into your floor plan, you can create them with folding screens, curtains, bookcases or modular shelving units. Just keep your work and school spaces clearly defined: Don’t work in bed and avoid having lunch at your desk.

If you’re still constrained by your home’s square footage, look for a wall-anchored desk that can stow away at the end of the day. Comfortable chairs are also worth the investment — for you and your kids — given the amount of time everyone spends seated now.

Parents shouldn’t do it all themselves. “It’s important to have kids take ownership of their work station,” said Michele Vancour, the associate dean of the College of Health and Human Services at Southern Connecticut State University and an expert on work-life balance. Have them pick out new supplies, to continue the ritual of back-to-school shopping.

You can further emulate a classroom environment with a sticker chart to encourage good behaviour, which can help keep younger children engaged and on-task, suggested Carol Olate, a project coordinator and coach at Texas School Ready in Houston, where she helps train early childhood teachers and child-care providers. When the chart is full, reward kids with a new book or game.

Stick to some kind of schedule

In the spring, many parents noticed that their children suffered because of the lack of structure to their days. Parents need that clarity, too. Each Sunday, take a look at the work and school obligations for the week ahead, and make a schedule that works for the whole family. Consider writing it all down on a giant dry-erase board.

Try breaking the day into discrete blocks. Robert Pozen, a former business executive and lecturer at the Massachusetts Institute of Technology, has proposed that the optimal amount of time to focus on a single task is 75 to 90 minutes, at which point fatigue starts to set in. If that seems impossibly long, try the Pomodoro Technique, which consists of 25-minute cycles of work accompanied by short breaks.

Speaking of breaks: They’re essential, even when they seem like an unfathomable luxury. Research has shown that periods of rest contribute to improved moods and better productivity for both adults and children. Set aside time for a bike ride or jog; take a walk around the neighbourhood over lunch or after work with your family.

To visually signal to kids when you are focused on work, Rattner suggested hanging color-coded tags on the doorknob or at the entry to your work space: green for go (when they can come in); red for stop (when you shouldn’t be interrupted).

When you’ve reached the end of the day, put away all work and school materials. “Tucking things out of sight tells your brain what modality you’re in,” Rattner said. That includes (if possible) your devices. Hisako Sonethavilay, a social science researcher and parent of a third grader in Oceanside, California, doesn’t receive email notifications on her phone. “It’s not life or death by email,” Sonethavilay said. Colleagues know they can reach her by phone or text in the case of an emergency.

Ask for flexibility at work

Some working parents have found themselves with little choice but to scale back work commitments. But even if you cannot alter your workload, give your manager and co-workers a heads up when you have additional school obligations, and be clear about what your workplace or your child’s school can reasonably expect from you, suggested the Providence, Rhode Island-based economist Emily Oster, who has written two books on parenting.

“This moment, as school is starting, is the time to have those conversations, rather than in a later moment when you’re angry and feel behind,” Oster said. Vocalizing the added pressure you’re under can also help validate and normalise the loads parents are bearing.

Find out whether your workplace offers reimbursements for tutoring and other educational supplements. After all, the onus should be on employers to accommodate and support parent employees. “It makes no sense for us to continue expecting the same level of output in this moment,” said H. Richard Milner IV, a professor at Vanderbilt University who studies educational equity, especially when you consider the combined psychological impact of COVID-19 and the recent Black Lives Matter protests — particularly for Black parents.

To share the burden of remote learning, Oster suggested having explicit conversations with others in your household about what needs to get done, by whom and when. This helps ensure all the tasks are clearly articulated and accounted for.

For parents whose work takes them outside the home, other family members can step in. “We should see the multigenerational presence in homes as an asset,” Milner said. “An older sibling might be central to the learning and development of the child. A grandparent might take on that role. For lower-income families, it’s about family and community engagement.”

It’s still possible to strengthen relationships remotely. Ausman’s family regularly checks in via group text, and Alex’s grandmother occasionally supervises his schooling via Zoom. “As much as we’ve lost the physical connection, in some ways, we’ve built connection,” she said.

Other families, including Sonethavilay’s, have come together in classroom-wide group texts, where they trade tips, provide emotional support and take turns bringing questions to a teacher’s virtual office hours — limiting the amount of time each one spends waiting for a meeting.

Reach out to your child’s school for support, too. At Mitchell Elementary in Chicago, one of the school’s parent-teacher associations organized a furniture drive, during which families with extra lamps, desks and other office equipment could give to others in need.

Many districts across the country have been dispatching hotspot-equipped vehicles and loaning laptops to students who don’t have internet access or a computer at home. Nonprofits like Human-I-T, PCs for People and even the hyperlocal, student-run Project Boom in Lexington, Massachusetts, which refurbishes old devices and donates them to low-income families, are filling a similar need.

Accept that you can't do it all

Be it a household chore or a morning meeting, there are certain things that might not happen. It can help to set expectations in advance about what’s realistic and what’s just not.

“At some point I just had to embrace it’s all happening at once,” said Sohini Ramachandran, an associate professor of ecology and evolutionary biology at Brown University. During one lecture in the spring, her daughter, then in first grade, interrupted, having taken a spill off her bike. Ramachandran’s undergraduate students chimed in with their support over chat: “I decided that that was a feature, not a bug.”