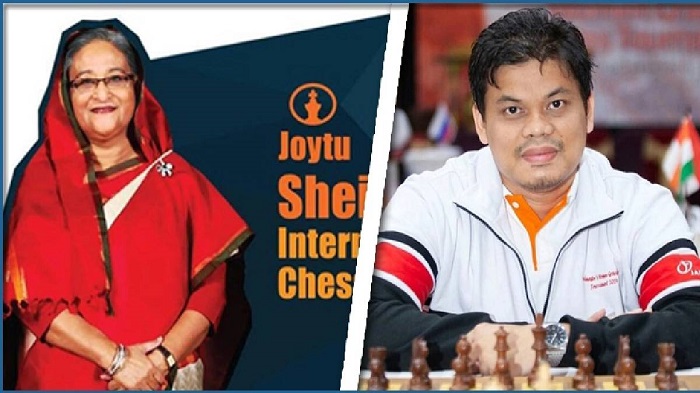 Prizes of the Joytu Sheikh Hasina International Online Chess Tournament' 2020 were handed over at a function at the La Meridian Hotel in the capital on Sunday.

A documentary film on Bangladesh Prime Minister Sheikh Hasina's life and leadership was also displayed at the function.

Addressing the function the State Minister for Youth and Sports said, Bangladesh under the dynamic leadership of Sheikh Hasina created a rare example in the world facing Coronavirus successfully and made Bangladesh a role model of development.

Prasing Prime Minister Sheikh Hasina for making huge development in the country's sports at grassroot level, the minister finally assured the Chess Federation to provide a permanent land for them very soon.

On completion of the nine-round competition last evening, three players have secured seven points each, but in the tie breaker Susanto clinched the title of the first ever meet, arranged on the occasion of the 74th birthday of Bangladesh Prime Minister Sheikh Hasina.

He received prize money of US dollar 1200.

The two other players---Indian GM SL Narayan and Iranian GM M Amin Tabatabaei, who also bagged seven points each, finished 2nd and 3rd respectively in the tie breaker to earn prize money of US dollar 800 and 500 respectively.

Three Bangladeshi GM even failed to manage a seat in the top 15 places of the meet, sponsored by Canadian University, Bangladesh, organised by South Asian Chess Council, associated by Golden Sporting Club.

The 7th to 9th rounds games were held on the Last day of the three-day meet on Saturday in the online chess platform.

A Total 74 players including 17 grandmasters, 6 International Masters from 14 countries including Bangladesh took part in the thee -day meet.