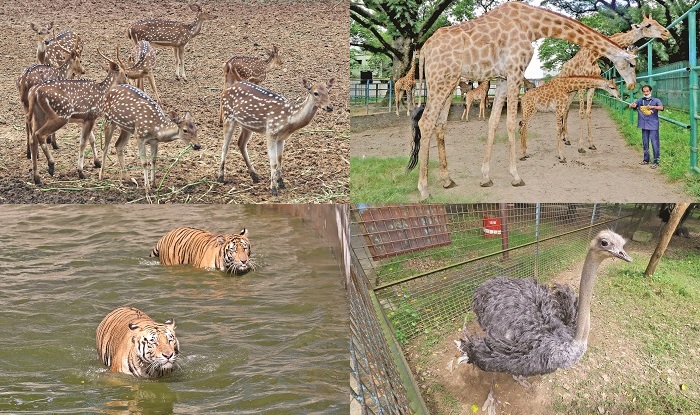 Animals are enjoying chaos-free tranquil environment at Dhaka Zoo, which remains closed due to the corona pandemic. The photos were taken on Sunday. Md Nasir Uddin

In the lazy autumn afternoon Royal Bengal Tiger Kadam was seen playing with his partner Sheuli in a small pool before taking kilograms of meat as lunch in their moat. Both of them seemed relaxed and pleased getting a respite from the noise of crowd.

Kadam and Sheuli were no exception. Since the government closed the National Zoo in Mirpur on March 20 due to coronavirus outbreak in the country, animals in the zoo are getting relaxed and enjoying their times in a serene and tranquil natural environment.

While visiting the world’s 4th largest zoo in term of area (186 acres) on Thursday, this correspondent found empty pathways. There was no visitor to annoy the animals. In normal time, visitors used to throw nuts, bananas and other food scraps to them.

The zoo staffers working there in two shifts are also satisfied. Md. Shuruj Mia, one of the caretakers, said that animals are moving around freely without fear instead of sitting at corners of the cage. The animals are passing very good time in absence of visitors’ gathering in the zoo.

Despite their captivity in the cages, animals looked livelier. On the right side of the Curator’s office, a few spotted and sambar deer were moving stupendously in their moat.

Being freed from annoying experiences, monkeys, the most poked animals of the zoo, were spending good time in their cages on the opposite side of the deer’s moat.

Walking through the gravel-paved road towards the North Lake of the zoo, we found saltwater crocodiles and hippopotamuses bathing in separate reservoirs.

With two vast lakes the National Zoo has always been a sanctuary of numerous local and migratory birds. Their number and variety have augmented in the last couple of months.

Peacocks, ostriches and emu birds are kept in several cages in the middle of the zoo.

Our wait for watching peacocks opening their spectacular feathers was meaningless as we could see it.

However, ostriches were seen eating roots and seeds and a number of emus were taking care of their hatchlings.

Kilogrammes of meat, grains, apples, cucumbers, sugarcane, watermelons, roots, grass and leaves are concocted every morning for the animals.

According to the caretakers since the closure of the zoo animals have been consuming all the food given to them.

They are getting much rest and breeding properly in absence of public gatherings. A total of 63 new members have been added to the zoo family in these five months.

Zoos are actually the places where visitors flock in large number to connect them with the nature. Consequently authorities make a good amount of money selling tickets which have been stopped for an indefinite period of time.

National Zoo’s curator Dr Nurul Islam said, “Every day around 20,000 visitors come to explore the zoo. Through selling tickets to them the government earns more than 12 crore taka per year. Responding our request the government is thinking to open the zoo for the visitors from October maintaining health guidelines.”

However, until the zoo resumes the authorities can concentrate on its future management strategies and the ‘Modernization of Bangladesh National Zoo’ project. Till then 2700 residents of the National Zoo can enjoy the lull.