Kusamono: The softer side of bonsai 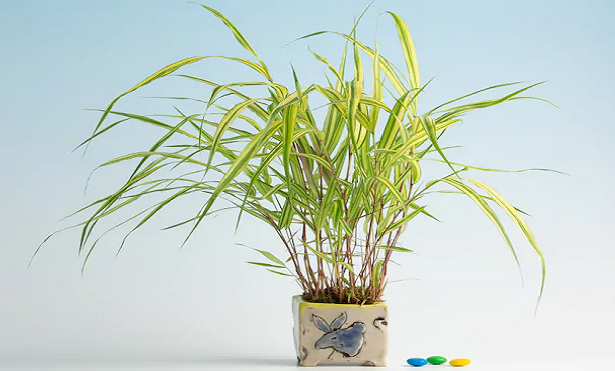 Most people know of the Japanese plant art of bonsai, in which tiny trees are cultivated in stylish pots. Few people are aware, though, of a related Japanese pursuit named kusamono, where simple wildflowers, grasses and other soft plants receive the same sort of treatment.

One reason for this is that although bonsai is a popular and commercialized hobby, there are just a handful of kusamono virtuosos in the United States, none more accomplished than Young Choe, a Korean American horticulturist from Ellicott City.

Her creations — unexpected, essential and surprisingly haunting — take common plants and elevate them as living subjects of delight and desire. A pennisetum grass you might barely notice in the office park becomes kinetic sculpture; common cranesbill is transformed into a grove of flowers; and the trillium of the woodland floor is placed on Choe’s pedestal.

“I love to show people how beautiful they are,” she said.

Her kusamono subjects are not so much shrunk, as bonsai is, but rendered as minimalist forms. She starts many from seed or cuttings, others are collected from her garden or the properties of friends, and some are acquired from plant nurseries, including misshapen waifs she transforms artistically. The stems are trained and shaped as they grow, a process that can take from two to six years to yield Zenlike perfection.

I find the creations incredibly powerful, even moving, especially the wildflowers normally found massed in nature. Singled out in low, stylish pots, they are removed from their ordinary settings to a place of veneration. In kusamono, as in most things in life, context leads to revelation.

How do you cultivate a garden with soul?

There might be another reason for the rarity of kusamono, which translates roughly as grass thing.

Bonsai, in skilled hands, can live for decades, even centuries, with little outward change. The herbaceous plants of kusamono go through shifting annual cycles, and some have a lifespan of just two or three years. For Choe, the natural progression of flowering, seeding and autumnal dieback adds to the plant’s dynamic beauty.

Traditionally, kusamono plantings and, especially, a related plant arrangement named shitakusa, were presented alongside bonsai as a way of conveying seasonality. The shitakusa is in a subordinate relationship to bonsai, and may consist of a wisp of grass. Kusamono, by contrast, “is frequently larger, more complex and stands alone as an artform,” said Anthony Pancotti, who runs a mail-order nursery in Seattle named Kusamono Gardens. He ships kusamono plants, mostly orchids, in the spring.

In Japan, top-rank bonsai competitions feature trees cared for by master growers employed by wealthy owners, Pancotti said. Kusamono is a more egalitarian way of giving plants Zenlike qualities. “Kusamono is very popular in Japan,” Pancotti said. “So, as opposed to having cut flowers on your table, you would have your [kusamono] arrangement outside and bring it in the home when it’s in bloom or looks good.”

Twenty years ago, Choe found a kindred spirit and mentor in Japan named Keiko Yamane. Choe learned Japanese and traveled to the country to study with her.

Choe’s day job is as the manager of a seed bank at the Agricultural Research Service in Beltsville, but she is also a volunteer at the National Arboretum’s National Bonsai and Penjing Museum, where her creations are displayed on a rotating basis.

The seasonal nature of perennials and grasses forms a key aspect of kusamono. Her spring compositions feature such plants as epimedium, irises and lily of the valley.

Summer brings lobelia, hydrangeas and milkweed. In fall, we find persicaria, cranesbill and, as you’ve never seen them before, chrysanthemums.

Another important aspect is the idea of the compositions mimicking natural plant associations, and for Choe, that means putting an American spin on her creations. Many feature East Coast natives, including trillium, columbine, Indian pink and twinleaf.

The bulk of her collection is assembled at various stages of development in her home and garden.

The novelty of kusamono here and its masterful cultivation have made Choe a popular speaker and instructor across the country and, on occasion, in Europe. Pancotti describes her as “the preeminent [kusamono] artist in the United States.” In a normal year, she would spend most weekends traveling to give talks and hold workshops. As a rule, she doesn’t sell her plants; her preoccupation is with creating them, not monetizing them.

During the constraints of the pandemic, she has been able to give her plants extra care — and with some 200 at home, their cultivation is a demanding task. In the heat of summer, they may need watering every day. If they are allowed to dry out, years of work can be lost.

Although they may live on the kitchen table for a week or two, they are not houseplants; they are hardy plants that need outdoor conditions and seasonal chilling. Choe generally cuts back the old top growth before storing them over the winter in a sheltered but unheated area.

Like with any artform, the skill and time behind kusamono are not evident. Some creations may require an intricate, if hidden, system of wiring to keep them secure in shallow pots.

A native jack-in-the-pulpit was raised over four years from seed. A species rose took at least six years, again grown from seed. Most plants are herbaceous, though some are woody — including hydrangeas, honeysuckles, deutzias and the rose.

Kusamono shares one essential element with bonsai: the importance of pairing pot with plant. The shape, the size, the color, the finish of a container are all in a dialogue with the plant. Choe has approximately 1,000 containers, but they must wait for the right plant before they are pressed into service. She obtains many from the vendors who attend bonsai shows; she commissions others directly from a network of bonsai potters. “I give them the dimensions, basic information, but I want them to create them in their own artistic way,” she said. “A lot of artists are poor, so I want to encourage them.”

An avid hiker, she sees potential candidates for her kusamono at every turn. She recently noticed the weedy, invasive wild violet and, after prying it from the ground, found the perfect home for it: a round pot just an inch and a half across. In kusamono, even the lowliest of plants is ennobled. “People love to see these cute little weeds,” she said.