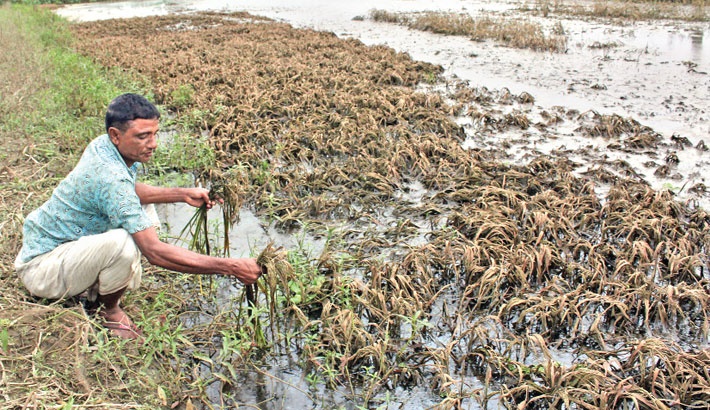 The prolonged flood has inundated more than 1.5 lakh hectors of cropland across the country, affecting the farmers severely during the coronavirus pandemic.

More than 1.5 lakh hectares of land of 14 different crops have been inundated by the two waves of flood in 35 districts across the country, according to the Department of Agriculture Extension (DAE).

Around 1 lakh hectors of paddy fields have been submerged by the flood, sources said.

Mostly Aman paddy fields have been affected by the flood and one-fourth of Bona Aman paddy has been damaged in 35 districts.

The prolonged flood has affected Aus and Aman rice, winter vegetables and other crops.

Aman and Aus rice seasons are the two major sources for the staple crops after Boro season. Aman comprises 37-38 per cent and Aus 7.0-8.0 per cent of the total rice output in the country.

The country’s agriculture sector has already incurred losses of Tk 3.5 billion as a total of 76,210 hectares of croplands with 11 kinds of produce were inundated between June 26 and July 9, in 14 districts, according to the Ministry of Agriculture.

Of the fields, nearly 42,000 hectares with Aus, Aman seedbeds, vegetables, green chilli, jute and others were damaged, causing losses for 0.345 million farmers.

But the final estimation on losses of crops by the second spell of the ongoing flood was yet to be prepared.

The government has formed 14 committees to accelerate the monitoring and cooperating activities including disbursement of fertiliser and seeds. The officials of the ministry will work with the committees to implement the government’s assistance programmes for the farmers.

The flood-hit people have been facing hardship amid the devastating flood that has been continuing for the last one and half months, damaging houses, croplands, domestics animals and other valuables.

The miseries of the flood-stricken people have multiplied due to loss of livelihoods. They are now compelled to sell their cattle and valuables at lower prices to manage their daily needs.

Water level of the river across the Dhaka city has been decreasing and it will continue the next 48 hours while flood situation in the low-lying area in Dhaka city may improve, said Arifuzzaman Bhuiyan, executive engineer of Flood Forecasting and Warning Centre (FFWC).

The river water was rising at 21 of the 101 points observed by the warning centre on Friday morning.

Twelve major rivers are flowing above their danger marks (DM) at 16 stations on the day, according to FFWC.