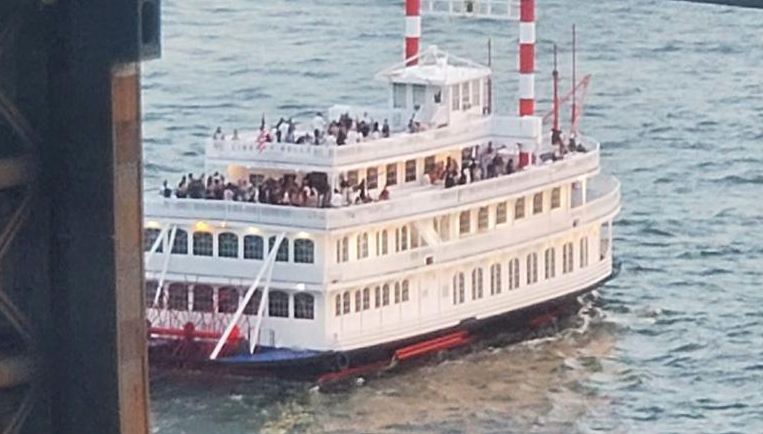 A riverboat party attended by more than 170 people in New York over the weekend violated state and city emergency orders, according to the New York City Sheriff's Office.

Sheriff's deputies on Saturday intercepted the Liberty Belle at Manhattan's Pier 36 on the East River and arrested the owners for an illegal party, the sheriff's office said on Twitter. Authorities also accused the boat operators of serving alcohol without a liquor license.
Boat operators Ronny Vargas and Alex Sauzo were issued appearance tickets for warehousing without a permit, operating an unlicensed bottle club and bar and for prohibited acts during a local state of emergency, according to a report from the sheriff's office.
Sheriff Joseph Fucito told CNN that in addition to serving alcohol without a license, the boat owners also violated New York City's emergency order, which prohibits establishments from serving alcohol indoors.
Vargas and Sauzo could not be immediately reached for comment.

The boat captain, who was unnamed in the report, was issued a summons for not properly displaying the vessel identification number, according to the sheriff's office.

The Liberty Belle, with its four decks, four bars and multi-level speaker system, often plays host to promotional events, concerts, corporate outings, church parties and other events, according to Empire Cruises, the company that operates the boat.

The boat seats 200 passengers and has a maximum capacity of 600, according to Empire Cruises.
Photos of the boat appear to show a large group of people gathered on one of the outdoor decks. It is unclear from the picture if they are wearing masks.

Empire Cruises says in a statement on its website that it ceased operations as of March 16 until further notice because of the Covid-19 pandemic.

On Monday, New York Gov. Andrew Cuomo called the boat party "just really reckless, rude, irresponsible and illegal," adding that it "violates public decency."
"What if one of those people on that cruise gets sick and dies?" he asked.

The governor also referenced another reported party near a New York City bridge and called for better enforcement across the state.
New York Mayor Bill de Blasio didn't comment about specific gatherings over the weekend when asked about it on Monday, but commended the sheriff's deputies for their actions. He also said that New Yorkers were overwhelmingly complying with social distancing guidelines.

"Overwhelmingly we've been blessed here in New York City that we have not seen a lot of clusters and people have handled things right," de Blasio said.