India-Bangladesh partnership marked by path-breaking events in recent past 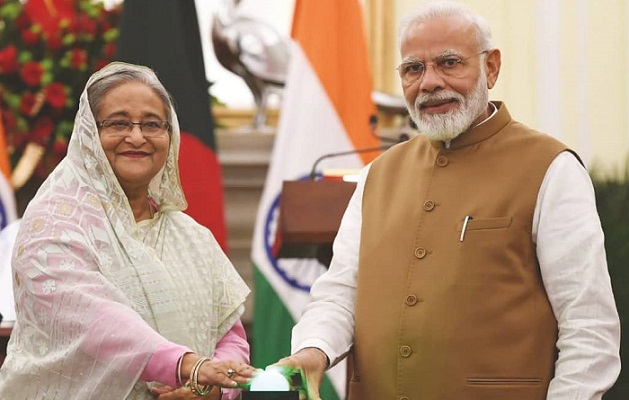 The two sides have just concluded first successful trial movement of the container traffic through Chattogram port from Kolkata to Agartala. Both sides have also signed second addendum to the protocol on Indian water trade and transit adding new ports of call and new routes. Both sides have been able to hold important meetings and have had two prime ministers speak to each three times since the outbreak of the pandemic.

PM Narendra Modi also delivered the inaugural address at the Mujib Barsho celebrations highlighting the golden chapter that India and Bangladesh have scripted in their ties. In the words of senior Bangladeshi politicians India is Bangladesh’s natural ally and foreign policy priority.

Economic Times has reliably learnt that reports suggesting that the Indian High Commissioner (HC) not getting meeting with PM Hasina are baseless. Indian HC calls on the PM as and when necessary and in accordance with the prevailing protocols.

The ongoing Covid-10 restrictions have led to deferment of scheduled meetings or interactions all over. To view this as Indian envoy not getting meetings is a specious argument, according to experts on India-Bangladesh affairs.

There was also good cooperation in mitigating COVID-19 pandemic as two countries also cooperated. India’s contribution of $ 10 million to SAARC Covid Fund was followed by Bangladesh announcement of $ 1.5 million to the fund. India also organised capacity building programmers for the Bangladeshi medical professionals including in exclusive bangla language.

Both sides are cooperating in diverse areas including space, IT, civil nuclear cooperation, shipping and electronics, etc and 90 MoUs have been signed between the two sides.

Of total LOC exposure of India of over $ 30 billion to 64 countries, approx $ 8 billion has been given to Bangladesh making it the largest recipient (26%). Moreover India has given it at mere one percent. India has also given outright grant to Bangladesh totaling $155 million focused on projects relating to sanitation, waste management, Urban planning focusing on local needs.

Bangladesh is now India's biggest trade partner in South Asia. The year of Mujib Barsho (2020) is special. India considers Bangabadhu as India’s hero as well. This year gives an opportunity to further strengthen ties and pay homage to both Indians and Bangladeshi brave hearts who died for a common cause.

Legacy and inspiration of Bangabandhu has made common heritage more interesting .The Indian leadership and people have always considered Bangladesh as a friend and supported the country’s progress in all fields. The understanding and rapport between the highest leadership of the two countries has resulted in the relationship charting a new direction and new grounds. There is an emotive link between the two countries, forged in 1971 which exists at the people to people level and therefore next year will be special.

Both sides have scripted a golden chapter in their irreversible partnership . As can be seen, both countries are in the process of implementing several new and ongoing projects aimed at enhancing our mutually beneficial partnership.