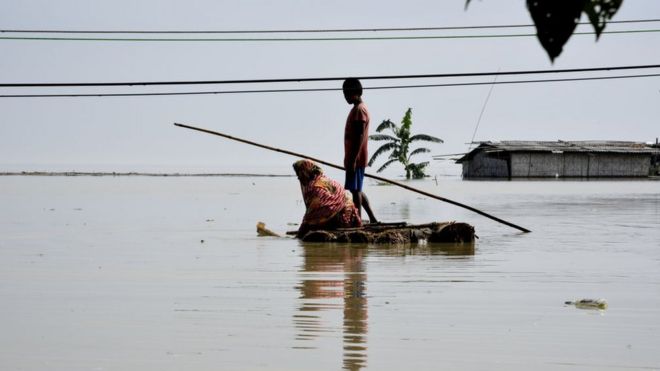 At least 50 people have been killed and more than two million affected by heavy monsoon flooding in the north-eastern Indian state of Assam, officials say.

A video of a minister wading into muddy waters to rescue people has highlighted the plight of those hit by the floods.

Heavy rain has submerged thousands of villages. Hundreds of relief camps have been set up to shelter those displaced.

A heavy monsoon in the region is common, but this year comes as India battles rising Covid-19 infections.

The minister, Mrinal Saikal, is seen in footage helping two children and a woman out of their flooded home and onto a boat. "Flood is creating havoc in my constituency," he wrote on Twitter. "We have been rescuing stranded people from interior places."On Tuesday, officials said that swathes of the Kaziranga National Park in the state, a Unesco World Heritage site, had been submerged and that at least 51 wild animals had died. Officials rescued 102 animals, they said, adding that some tigers and rhinos strayed into nearby villages to avoid flooding.

Kaziranga is home to two-thirds of the world's population of the one-horned rhinoceros.
Officials deployed nearly 100 boats across the state in the past few days, according to local media reports.

Authorities have also set up 480 relief camps across 20 districts, providing temporary shelter for more than 60,000 people. Roads, homes and buildings have been inundated by flood waters in parts of the state.

A heavy monsoon is a yearly occurrence in Assam, resulting in flooding and landslides which force residents to flee their homes, often leaving behind their belongings. In fact, when a controversial citizenship act last year required residents to prove their Indian citizenship via documentation, many feared they wouldn't be able to do so due to the rains either destroying documents or families being displaced.

Around the same time in 2019, millions were stranded or displaced as devastating floods ravaged large parts of India, Nepal and Bangladesh.

Assam and Bihar were the two Indian states that bore the brunt, with officials saying that nearly 100 people were killed.