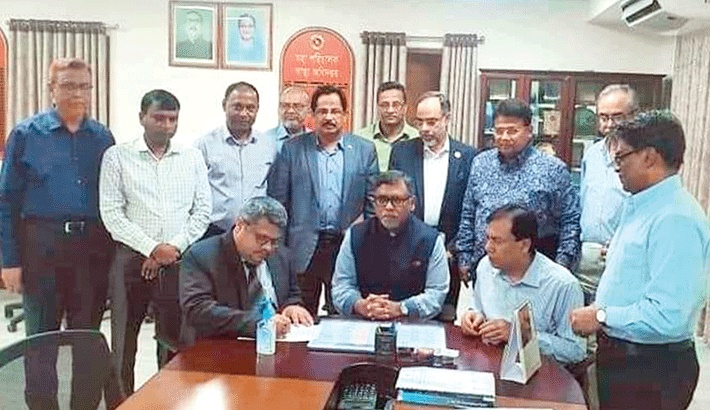 Regent Hospital Chairman Shahed Karim is yet to be traced though law enforcers launched a massive drive to arrest him over the forgery of coronavirus test in his hospital.

Rapid Action Battalion personnel are searching for Shahed, but they are yet to find out his whereabouts, RAB Intelligence Chief Sarwar Bin Quasem told journalists.

“He must be communicating with someone. We’re trying to find him out.” he said.

Shahed is among the 17 people accused in the case filed over the forgery of test and treatment of corona patients.

The RAB has so far arrested nine of the accused in the case.

Members of the elite force on Saturday night seized the passport of Shahed from his Regent’s office in Uttara area of the capital, said Ashik Billah, a spokesman for the elite force.

“He must surrender to police. Otherwise, he would be arrested,” he said.

Replying to a question, the minister said that there was no scope for Shahed to flee the country as his passport has already been seized.

All land and airport immigrations have also been informed of the ban on Shahed’s travel so that he cannot cross the border, he added.

The home minister disclosed this on Sunday at a review meeting over the country’s law and order situation at his secretariat office.

“We’re hunting for him. We hope that he will be caught soon,” the minister added.

Police and RAB personnel have conducted separate investigations into the allegation of forgery against Shahed.

After submitting the investigation report, “We can tell you what kind of misdeeds he has done. The RAB has already taken some action,” the minister added.

Earlier, the RAB sealed off Regent Group’s main office, Uttara and Mirpur branches of the hospital on charges of various irregularities, fraud, violation of agreement with the government, issuing fake Covid-19 certificates, taking extra charge for treatment and the like.

Meanwhile, Directorate General of Health Services (DGHS) has claimed that it took initiative to sign a memorandum of understanding (MoU) with Regent Hospital as per the directives from the top authorities of the Health Ministry.

DGHS came up with the claim on Saturday in a press statement. The statement was made to clarify DGHS’ stand on the fraudulence committed by Regent Hospital owner Md Shahed and JKG Group.

The DGHS press release claimed that its director general never met Shahed except for seeing him in some talk-shows on television. But Shahed visited DGHS several times after the signing of MoU.

DGHS in the statement also claimed that it was not aware of the fraudulent activities of Shahed and his clinics.

As Covid-19 patients were increasing in the month of March, DGHS signed the MoU with Regent Hospital, thinking that it would inspire other private hospitals to take step to treat coronavirus patients, according to the statement.

The DGHS also said although the licences of two branches of Regent Hospital had expired, it signed the MoU and gave it permission to treat coronavirus patients on condition of renewing the licences on 21 March.