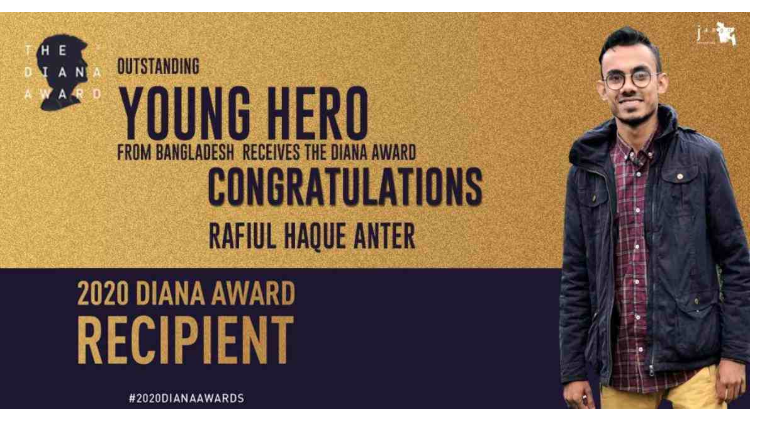 A Bangladeshi young man was honoured with ‘The Diana Award’ for going above and beyond in his daily life to create and sustain positive change in society.

Rafiul Haque, 23, from Bangladesh has been recognised with the highest accolade a young person can achieve for social action or humanitarian efforts– ‘The Diana Award’, said a press release from JAAGO Foundation on Thursday.

Established in memory of Diana, Princess of Wales, the award is given out by the charity of the same name and has the support of both her sons, The Duke of Cambridge and The Duke of Sussex.

Rafiul has been motivated to help his native communities in Bangladesh which led him to volunteer for the JAAGO Foundation.

Among the most notable was the ‘Sponsor A Child’ campaign, where he managed to organise 150 sponsor parents to help fund underprivileged children’s access to education whilst also raising $40,000 in one year.

Tessy Ojo, CEO of The Diana Award, said, “We congratulate all our new Diana Award recipients who are changemakers for their generation.”

For over 20 years, The Diana Award has valued and invested in young people encouraging them to continue to make positive changes in their communities and lives of others.

This year’s Diana Award Recipients represent some of the most inspirational young people from across the UK and around the world.

These exceptional young people have demonstrated their ability to inspire and mobilise new generations to serve their communities and create long lasting change on a global scale.