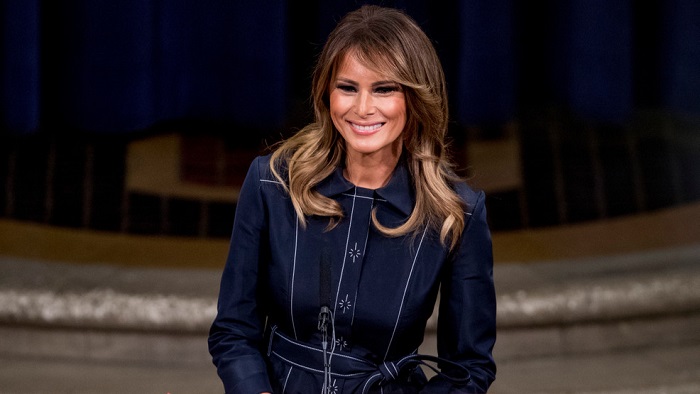 Melania Trump wants to use art to help children learn about women's suffrage.

The first lady on Monday announced a youth art project to coincide with the ratification nearly 100 years ago of the constitutional amendment that granted women  the right to vote.

The project, "Building the Movement: America's Youth Celebrate 100 Years of Women's Suffrage," will showcase artwork by students in grades three to 12 from all U.S. states and territories.

Melania Trump said children should be included in conversations about the upcoming centennial so they can learn the history behind the women's suffrage movement, including peaceful protests like those they see taking place in response to the death of George Floyd  in Minneapolis.

"For decades, women leaders lobbied, marched, and protested for equality and their right to vote in the United States," the first lady said in a statement to The Associated Press. "It is my hope that this project will both support and expand the important conversations taking place on equality and the impact of peaceful protests, while encouraging children to engage in the history behind this consequential movement in their own home states."

Children are being asked to submit drawings by July 6 depicting individuals, objects and events representing the suffrage movement. One piece of art from each state and territory will be included in a White House exhibit scheduled to open in August. How the art will be presented — either a physical exhibit or online — will be determined based on federal guidelines for COVID-19.

The 19th Amendment was first introduced in Congress in 1878. The House passed it in May 1919 and it cleared the Senate two weeks later.

The votes of three-fourths of the states are required to change the Constitution. The 19th Amendment was adopted on Aug. 18, 1920, after Tennessee became the 36th state to ratify it.