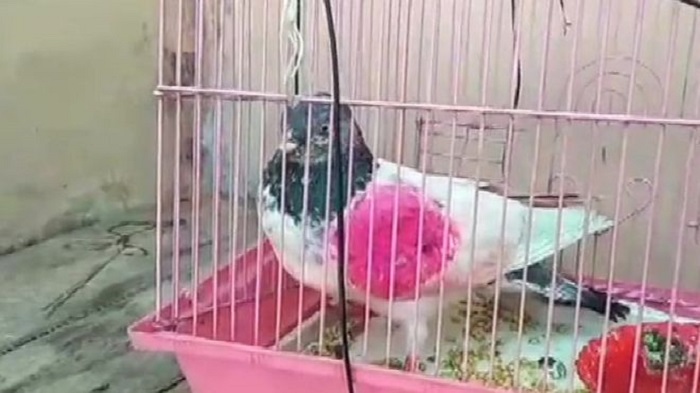 A Pakistani villager has urged Indian Prime Minister Narendra Modi to return his pigeon, currently being held in India on charges of spying.

The man, who lives just 4km (2.5 miles) from the border, said he flew his pigeons to celebrate Eid festival.

Police said the pigeon had a ring on one of its legs, inscribed with a code that they were trying to decipher.

The Pakistani villager, who claims the arrested pigeon is his, says the code is actually his mobile phone number.

Pakistan's Dawn newspaper has identified the man as Habibullah and reports that he owns a dozen pigeons.

Habibullah told the paper that his pigeon was a "symbol of peace" and India should "refrain from victimising innocent birds".

Villagers captured the bird on Monday along the international border in Indian-administered Kashmir and handed it over to the police.

The Kashmir region is claimed by both India and Pakistan, and is the scene of regular military exchanges between the nuclear-armed neighbours.

This is not the first time a pigeon flying from Pakistan has landed in trouble with Indian officials.

In May 2015, a white pigeon was arrested after it was spotted by a 14-year-old boy in a village close to the border.

And in October 2016, another pigeon was taken into custody after it was found with a note threatening the Indian prime minister.

The two nations have been rivals for a long time, with the last full war between them taking place in 1971.