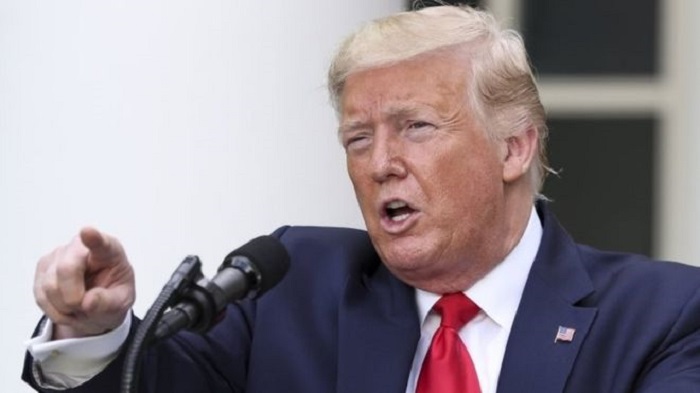 A post by US President Donald Trump has been given a fact-check label by Twitter for the first time.

Trump tweeted, without providing evidence: "There is NO WAY (ZERO!) that Mail-In Ballots will be anything less than substantially fraudulent."

Twitter put a warning label in the post and linked to a page that described the claims as "unsubstantiated".

Trump on Wednesday threatened to "strongly regulate" or even "close down" social media platforms.

He tweeted that Republicans felt the platforms "totally silence conservatives" and that he would not allow this to happen. In an earlier tweet, he said that Twitter was "completely stifling free speech".

Later on Wednesday he said that Twitter "has now shown everything we have been saying about them... is correct" and vowed "big action to follow".

For years, Twitter has faced criticism for not acting on the president's controversial tweets, which include personal attacks on political rivals and debunked conspiracy theories.

This month the platform introduced a new policy on misleading information amid the coronavirus pandemic.

But recent posts in which Trump - who has more than 80 million followers on Twitter - promoted a conspiracy theory about the death of political aide Lori Klausutis, blaming a high-profile critic, have not received the same treatment.

The notification on Trump's tweet shows a blue exclamation mark and a link suggesting readers "get the facts about mail-in ballots".

It directs users to a page on which Trump's claims are described as "unsubstantiated", citing reporting by CNN, the Washington Post and others.

The pandemic is putting pressure on US states to expand the use of postal voting because people are worried about becoming infected at polling stations.

In a "what you need to know" section, Twitter writes that Trump "falsely claimed mail-in ballots would lead to 'a Rigged Election'."

"Fact-checkers say there is no evidence that mail-in ballots are linked to voter fraud," it continues.

The company had pledged to increase the use of warning labels about false or misleading information on its site, but has been slow to take steps against the US president.

Trump posted the same claim about mail-in ballots on Facebook, but it is not fact-checked on that platform. 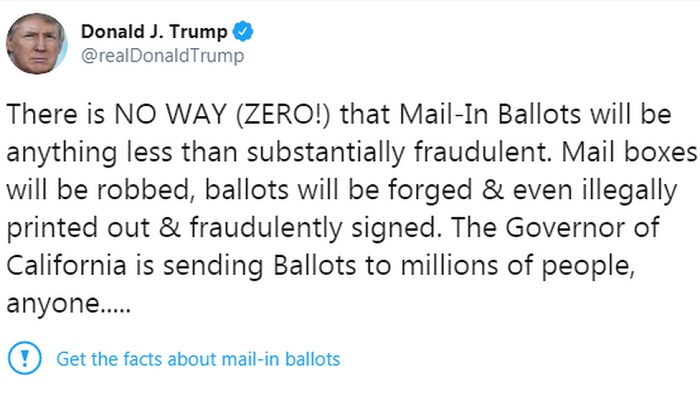 What is President Trump's response?

Trump then accused Twitter of interfering in the US presidential election scheduled for 3 November 2020, saying the company was "completely stifling free speech, and I, as president, will not allow it to happen".

His tweet on Wednesday told social media to "clean up your act now" and that he would not let a "more sophisticated version" of what they had "attempted to do, and failed, in 2016" happen again. He did not elaborate.

With more than 52,000 tweets currently to his name, Trump is a prolific tweeter and relies on the platform to disseminate his views to millions of people.

He has used Twitter to launch attacks on opponents, with targets ranging from North Korean leader Kim Jong-un to his political rivals in the US.

"Partnering with biased fake news 'fact checkers' is a smoke screen to lend Twitter's obvious political tactics false credibility. There are many reasons we pulled all our advertising from Twitter months ago, and clear political bias is one of them," Parscale tweeted.

President Trump has used Twitter as a platform to pick fights with other politicians and celebrities. Now he may be in for a fight with the platform itself.

Following the firm's decision to label his tweets as misleading, he claimed on Twitter that the company was stifling free speech and that he wouldn't allow it. But Twitter as a private company gets to set its own rules for what happens on its platform.

The trouble for many was that up until Tuesday the firm didn't seem to be enforcing its rules when it came to the US president or other global leaders. This is not the first time President Trump has made claims on Twitter that some say would have had less powerful people blocked from the site.

But Trump's bombastic comments are part of what draws some of his followers to the site in the first place. The company doesn't want to lose them.

It sees the new labelling system as a way to balance both the desire to allow Twitter users including the president to say what they like, while also giving readers protection against misleading claims. The strategy mostly worked with tweets about Covid-19.

But with the US election in November, Twitter should expect a lot more posts with potentially misleading information. Meaning this is likely only the first test for its new enforcement plans.

What are mail-in ballots?

They are voting bulletins that are distributed and returned by post. In a recent opinion survey conducted by the Pew Research Center, 66% of Americans said they would not be comfortable going to a polling place to cast their ballot during the coronavirus outbreak.

Such concerns have increased pressure on states to expand the availability of mail-in ballots for all voters in order to minimise the risk of viral exposure from in-person voting.

While every state provides some form of remote voting, the requirements to qualify vary greatly.

Five states in the western US, including Washington, Oregon and Colorado, conduct their elections entirely via mail-in ballot.

Others, like California, provide a postal ballot to anyone who requests it.

On the other end of the spectrum, 17 states require voters to provide a valid reason why they are unable to vote in-person in order to qualify for an absentee ballot.

The move comes on the heels of Twitter's decision not to remove a comment President Trump made about the death of Lori Klausutis in 2001.

The president has tweeted several messages promoting a conspiracy theory that Ms Klausutis was murdered by MSNBC host Joe Scarborough.

The company told Klausutis it was "deeply sorry" about the pain caused by the president's statements, but said the tweets did not violate their policies.