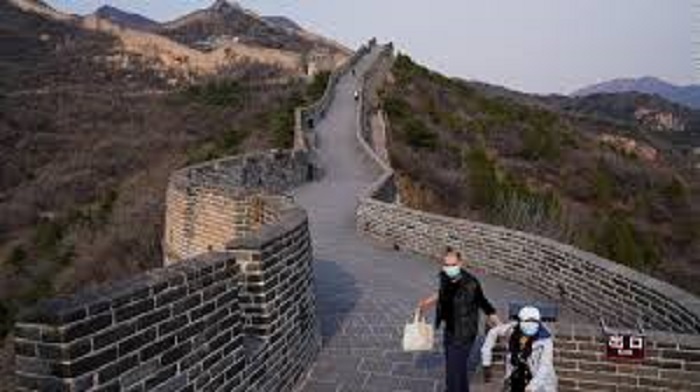 Officials in China are hoping the threat of public shaming will prevent tourists from defacing the country's most famous icon -- the Great Wall.

The popular Badaling section of the Great Wall reopened on March 24, after being closed for two months due to the coronavirus outbreak. That very same day, a visitor was reportedly caught on camera defacing the historic site with a key.

"How could such uncivilized behaviors happen repeatedly?" asked Weibo user Wuhan Luyoujia on a discussion board."I think these people should be arrested and locked away for five days so they would remember the lesson."
In response, the Great Wall Office, which is responsible for the administrative and public affairs within the Badaling special tourism zone, has implemented a series of new disciplinary measures against vandalism starting from April 6.

According to the Yanqing County Badaling Special Zone Office's Weibo account, it "will impose administrative penalties on seven types of vandalism towards cultural relics including carving and other intentional damages."

Misbehaving tourists will be added to a blacklist that will be announced to the public regularly to "increase awareness and apply pressure [on tourists] with public opinion."

Offenders will reportedly face restrictions when they attempt to purchase online tickets to the Great Wall in the future, though the announcement doesn't specify what those are.

Meanwhile, the Information Office of the Beijing Municipal Government said Yanqing County is considering banning blacklisted tourists from entering other tourist attractions in the district. If they've committed a criminal offense, violators will also be handed over to law enforcement agents.

Both netizens and media welcomed the new regulations.
"The epidemic has already 'injured' the tourism industry greatly, making the defacement of the Great Wall even more unbearable," said an opinion piece on the state-run Beijing Youth Daily.

"Increasing exposure to the tourist blacklist will put more pressure on the offenders with public opinion, putting a tight chain on the tourists who ignore the rules," commented another state-run media outlet, Beijing Daily.
Around 70 kilometers (43 miles) from Beijing, Badaling is the most popular section of the wall for tourists. According to the Information Office of the Beijing Municipal Government, the vandal was found and confessed to carving the wall with a key.

It isn't the first time China has created a tourist blacklist.
Parks in Beijing have also blacklisted "uncivilized visitors" and used face scanners to bar those visitors from entering the park last year during the annual Tomb Sweeping Festival.