Coronavirus: How do you celebrate a religious festival while social distancing? 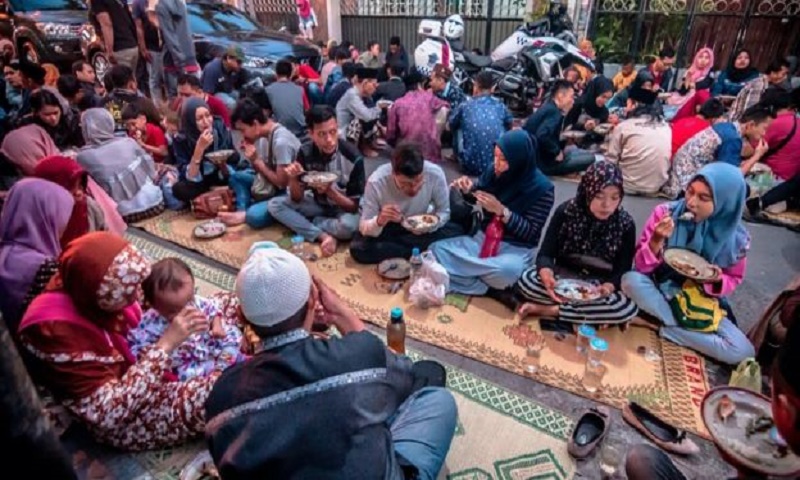 The evening of 8 April is the beginning of Passover, one of the most important religious festivals of the Jewish calendar.

Jewish families and their friends would usually gather together to eat a special meal called a Seder, read religious texts, sing and tell stories. It's a time when Jews remember how Moses led their ancestors out of slavery in Egypt.

But social distancing measures in countries around the world mean that this year Jewish people can't invite others to join them for the Seder meal.

Easter and Ramadan are also fast approaching, so the same dilemma is being faced by Christians and Muslims across the globe.

Some US churches and pastors are ignoring 'stay at home' orders, but for those who are isolating, how can they keep that sense of community at the heart of religious celebrations alive?

Rabbi Rick Jacobs lives in New York, the epicentre of the outbreak in the US.

For people who have decided to host Seder virtually, Rabbi Jacobs has some tips.

Top of the list, is to try and adapt different parts of the ceremony to fit the current situation. "There's the traditional hand-washing during the Seder ritual," he says.

"The truth is that was more about ritual impurity, not cleanliness.

"But now we're trying to make that ritual about teaching our children that washing your hands really effectively is part of keeping our community safe and healthy."

He also has suggestions on how to make the experience more interactive.

"There's a moment where traditionally you open the door for Elijah. You usually ask one of the younger members of the Seder to open the door.

"It may be that the youngest member of Seder is not in your house now. They can pick up their [tablet] and walk over to the door of their houses and open it up."

"But the truth is that [it's] a kind of ritual gesture, so how do we take the sense of opening and of longing for redemption [forward]?

"We're suggesting a moment to go round the Zoom chat [and ask], 'What are things that people are hoping for? What are the things that we are willing to do to bring more healing and wholeness to our world?"

"The very substance of Passover is so much of what we need right now. It's a story of the resilience of the Jewish people in a moment of great difficulty and challenge and it's a ritual that reminds us to always have hope."

Many people gather in church over this period, particularly on Good Friday and Easter Sunday.

Now rituals and sacraments normally led by a priest in church are being done differently.

Carole Kutsushi, is a Christian living in Kenya's capital Nairobi. "We will be doing Holy Communion together on Good Friday on Zoom," she says.

"Because of the situation we cannot get the bread that you use in church, so we will use an element that would signify that.

"We'll just take a piece of [ordinary] bread and grape juice, and pray over the elements and then say the communion [together and] take it in unison."

While Kenya is not yet in full lockdown, there is a night-time curfew and the government is urging people to stay home.

Now, she says, they hold virtual meetings, and have increased the number of times they connect with each other.

"Our church leaders send out scriptures and topics to discuss each week. We have discussions on Zoom every Tuesday and every Friday, [and] we have prayer.

"It's a bit of a challenge but I think it's also a nice way for us to get closer to God in our own respective homes, even involving the children as well in reading the Bible."

Having to work to stay connected with her church fellowship group has had its upsides, says Carole.

"I think this has brought us even closer than before".

A Ramadan unlike any other

The Muslim Holy month of Ramadan starts on 23 April. It is a time to remember the month that the Muslim holy book the Qur'an was first revealed to the Prophet Muhammad.

Muslims abstain from food and water during daylight hours as a way of devoting themselves to their faith and getting closer to Allah.

Every evening when the sun has set, families and friends get together for the Iftar meal to break the fast. Many people go to the mosque to pray.

In the UK a group of young Muslims is trying to use the new reality as an opportunity.

The Muslim Tent Project usually holds an event called Open Iftar, where they put up a tent in an iconic location like London's Trafalgar Square. People of all faiths are invited to join the meal.

This year, they will hold a virtual Iftar on the first day of Ramadan and hope thousands of people will join them.

The team is sending out packs for people to create their perfect Iftar experience, including recipes, games and fact sheets.

Zoom-based Iftar meals will continue throughout Ramadan, with a live call to prayer every day.

"It's the evening prayer called Maghrib, which is the time when we all [break] our fast together," says Rohma.