Coronavirus was like 'glass in my throat - I've lost half a stone' : UK Health Secretary 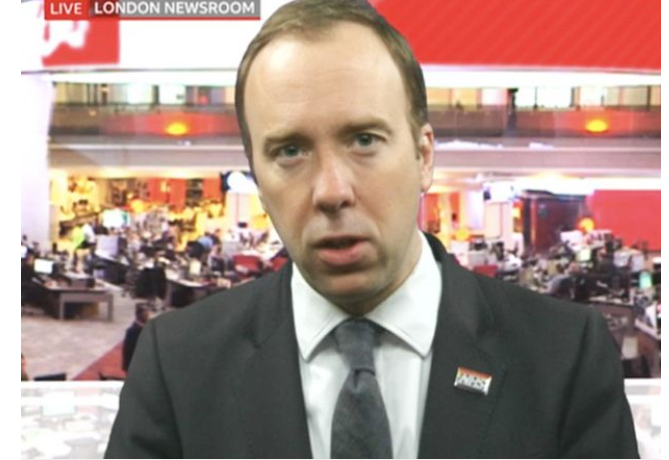 Tory Matt Hancock has revealed coronavirus felt like "glass in my throat" - and he has lost half a stone.

The Health Secretary had a relatively mild case of Covid-19 - but said he still struggled to sleep and could not eat or drink for "a couple of days".

He told BBC Breakfast: "It was a pretty unpleasant experience.

“I went downhill on Thursday last week and for a couple of nights it was very hard to sleep”.
Mr Hancock had “a bit of a cough” but not a serious one. However, he had an “incredibly painful throat - it was like having glass in my throat. I couldn’t eat or drink anything for a couple of days.”

He added: “When you’re on the way down it’s really worrying because we can all see just how serious this illness is.

“I found it really worrying… thankfully it bottomed out and I started getting better.”

He added: “I’ve lost half a stone. It’s quite a serious impact directly.

“But thankfully for me I could get through it, and I managed to keep working through it. But it’s obviously much harder when you’re both working from home and not very well.”
Boris Johnson was due to come out of self-isolation today, seven days after he came down with symptoms.

But the Prime Minister could be forced to stay isolated in the Downing Street flat for longer, after he continued to show "mild" symptoms that hadn't abated yesterday.

It came as the Health Secretary faced scrutiny over his pledge to ramp up testing for Covid-19 to 100,000 a day by the end of April.

In the small print of his announcement, he admitted the 100,000 includes both antigen tests - which show if you currently have the virus - and antibody tests.
Antibody tests show if you've had the virus in the past and might be immune. They're useful, but haven't been approved yet; may only work 28 days or more after infection; and aren't as immediately needed.

The previous target of 25,000 tests a day was just antigen tests.

Mr Hancock cast more doubt on the programme today when he admitted he couldn't guarantee he would get to 100,000 tests a day by the end of April.
BBC Breakfast asked him: "Can you guarantee this is going to happen?"

He replied: “Yes, it’s got to happen”

The Health Secretary refused to give a guarantee because he said there were many “pieces of this puzzle” including the NHS, existing tech companies, new companies and university labs.
He said: “There’s an awful lot of work to do to make it happen. That’s why I talk in the language of a goal. Of course we’ve got to get there, but there’s a huge amount of work to do.”

He added: "There are barriers, there will be bumps in the road, and some of this is going to be very difficult."

Mr Hancock faced anger over the fact just 5,000 NHS staff have been tested for the virus.

Today he insisted only around 35,000 frontline NHS staff are not in work due to coronavirus - far lower than figures over 100,000 that have been reported.

But again, he could not guarantee when all NHS staff will get the tests they need.

He said he hoped for it in the coming weeks but added: "I don’t want to make a commitment I can’t meet".

Mr Hancock said the peak of the virus may be “slightly sooner” than previously predicted, “in the next few weeks”, now that lockdown measures have come into play.

Urging people to stay at home to keep the peak small, he told BBC Radio 4’s Today programme: “The more people follow those social distancing rules, the sooner that peak will be.”