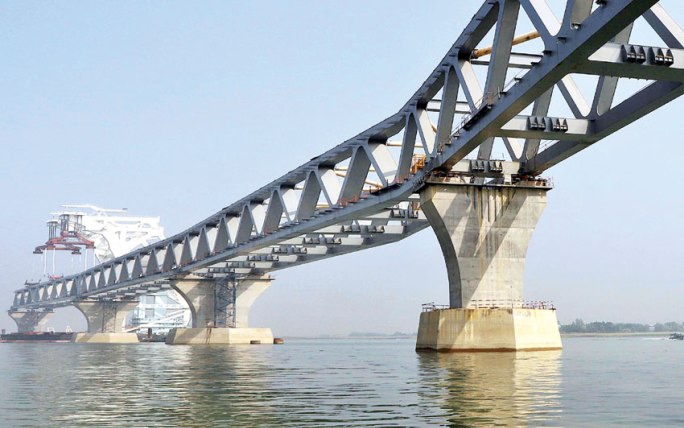 The 27th span of the 6.15-kilometre long Padma Bridge has been installed at the end of Zajira in Shariatpur, making 4.05 km of the main structure of the bridge visible.

The 5-C span was installed on pillars number 27 and 28 of the bridge at around 9:23am on Saturday Dewan Abdul Quader, executive engineer of the Padma Multipurpose Bridge Project, said.

Earlier, the 150-meter long span was brought near the pillars by a floating crane from Mawa's Kumarbhog construction yard on Friday morning, he said.

With the installation of the 150-metre span today, total 27 spans out of 41 were installed in phases, Quader said, adding that five more spans will be installed soon.

Meanwhile, the construction of 41 pillars out of 42 has already been finished.

According to Road Transport and Bridges Minister Obaidul Quader, all the spans (41) of the bridge will be installed by July 2020.

He also said the bridge would be opened to traffic by 2021.